Kathua rape victim sank into coma due to overdose of sedatives: Forensic experts 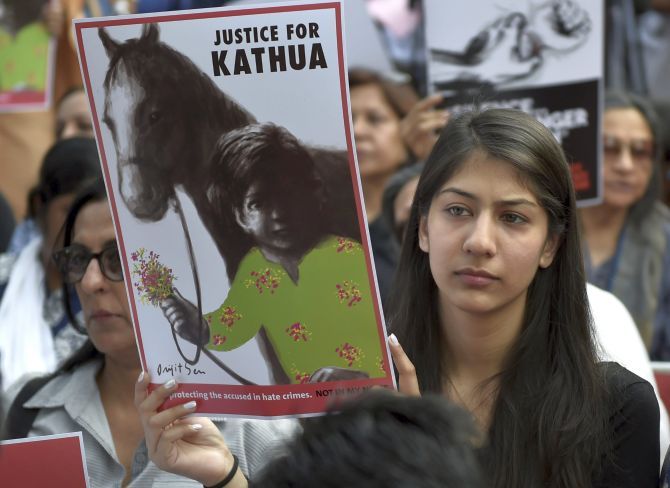 Overdose of sedatives, forcibly administered to an eight-year-old rape victim during her captivity in Kathua in January this year, could have pushed her into a coma before she was killed, forensic medical experts have said.

The crime branch of the Jammu and Kashmir Police, probing the gang rape-and-murder case, sent a sample of her viscera to a forensic laboratory earlier this month to examine the effect of “mannar” candies (believed to be local cannabis) and Epitril 0.5 mg tablets, administered to the girl by her captors.

According to the medical opinion received recently by the crime branch, the doctors said the tablet given to the eight-year-old girl could have pushed her into a state of shock or coma (loss of consciousness).

The crime branch had asked the medical experts to comment upon the plausible effect of the medicine on an eight-year-old girl with an empty stomach.

The crime branch decided to seek further medical opinion after it was claimed by the accused and their lawyers in the court, as well as on social media through their supporters, that it was virtually impossible that the girl could not have cried for help when such an alleged brutal attack was happening on her.

The doctors, after examining the viscera, opined that the medicine administered to the victim contained Clonazepam salt and had to be administered under medical supervision keeping in mind the age and weight of the patient.

“Considering her (victim) 30-kg body weight, the therapeutic dose of 0.1 to 0.2 mg per day divided in three doses for patient (is recommended),” it said.

“She was forcefully administered five tablets of Clonazepam of 0.5 mg each on January 11, 2018 which is higher than the safe therapeutic dose. Subsequently more tablets were given...the signs and symptoms of an overdose may include drowsiness, confusion, impaired coordination, slow reflexes, slowed or stopped breathing, coma (loss of consciousness) and death,” according to the opinion of the medical expert.

The peak concentration of Clonazepam is achieved in the blood after one hour to 90 minutes of oral administration and its absorption is complete, “irrespective of administered either with or without food”, according to the concluding opinion of the medical expert.

The opinion would be submitted before the district and sessions court in Punjab’s Pathankot, hearing the matter, after the summer break next week.

The trial of the case was shifted from Kathua (in Jammu) to Pathankot on the directions of the Supreme Court.

The doctors said the risk is higher if Clonazepam is “concomitant used with other central nervous system depressants like alcohol...”

The doctors, however, could not give any laboratory analysis of ‘mannar’ candies and said “it is difficult to comment on the effect its co-administration with Clonazapem” would have.

‘Mannar’ is locally available cannabis, which keeps a person sedated for a few hours.

The eight-year-old child belonging to a minority nomadic community was allegedly kidnapped on January 10 by a juvenile nephew of the main accused, Sanji Ram, and later killed on January 14. Her body was recovered on January 17.

According to investigators, Sanji Ram was aware she had been kidnapped but didn’t know about the rape.

Besides Sanji Ram and his juvenile nephew, others named in the chargesheet filed by the crime branch are his son Vishal, special police officers Deepak Khajuria and Surender Verma and friend Parvesh Kumar alias Mannu.

The district and sessions court in Pathankot framed charges of rape and murder against the seven accused in the case on June 8.

Sanji Ram, considered the main accused, is alleged to have hatched the conspiracy with the other accused for kidnapping the girl as part of a strategy to remove the minority nomadic community from the area.

The fate of the eighth accused, a juvenile, was yet to be decided after the crime branch of the Jammu and Kashmir Police moved an application in the high court claiming him to be an adult.