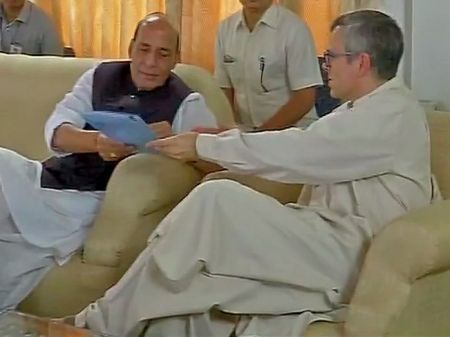 Main opposition National Conference on Sunday asked the Centre to initiate a sustained dialogue with Pakistan as well as separatists groups in Jammu and Kashmir for evolving a consensus for a mutually acceptable solution to the political issue.

The party also said it would be a travesty to treat the current unrest in the Valley as a mere law and order problem.

This was conveyed to Home Minister Rajnath Singh, who is in Srinagar since Saturday to review the situation, by a delegation of NC, led by former chief minister and its working President Omar Abdullah.

In a memorandum to the home minister, the NC expressed deep disappointment at the Centre's failure to recognise the problem in Kashmir "as a political problem which requires political engagement -- both internally and externally."

While it was "palpable and shocking" to see the continued failure of the state government in dealing with the situation, "it would be a travesty to simplify the current unrest in the Valley as a pure law and order issue," the party said.

It said the tried and tested formulations of New Delhi in dealing with political sentiment in Kashmir "operatively and militarily", rather than "thinking out of the box", has further exasperated the situation and created an unprecedented sense of disaffection and cynicism – especially among the youth – that could have adverse long-term implications.

The delegation hoped that the Centre would consider the consequences of refusing to acknowledge the political sentiment in Kashmir and take immediate steps to initiate a sustained political dialogue with Pakistan and internal dialogue with stakeholders and a cross-section of leadership in the Valley.

"A continued failure to address growing political alienation in Kashmir goes against the interests of the people of India," they said.

Registering its anguish, grief and sorrow over the painful loss of lives in the Valley in the current unrest, the NC condemned the Peoples Democratic Party-Bharatiya Janata Party's state Government's "evident insensitivity and blatant inefficiency in dealing with this heart-rending situation."

"Also, to blame external forces and vested interests alone would be a dangerous diversion that takes us away from the basis, for not only such unrests and agitations in Kashmir but also a prolonged political turmoil that has resulted in the loss of thousands of lives," the NC memorandum said.

The delegation, which also comprised Ali Mohammed Sagar, Abdul Rahim Rather and Nasir Wani, demanded a judicial probe into the "mishandling of the situation in the aftermath of Burhan Wani's killing, including the veracity of claims made by (PDP) senior leaders including its Member of Parliament for North Kashmir and the State's Finance Minister".

Highlighting the handling of situation in the aftermath of killing of Wani, the NC leaders said when there was a need for dealing the situation in a political and humane manner, the situation was further compounded by contradictory statements by ministers and elected representatives belonging to the ruling dispensation.

"While senior PDP Leader and Member of Parliament Mr Muzaffar Hussain Baig has blamed 'internal rivalry' within certain sections of the state Police for Wani's killing, another PDP Leader and state Finance Minister Dr Haseeb Drabu has termed Burhan Wani's killing a case of custodial execution by the State Police while speaking in a Cabinet Meeting," the opposition delegation alleged.

It said the judicial probe should also ascertain "if excessive force was used against protestors in the Valley with an aim to initiate legal proceedings in cases where excessive use of force is proven. Timely and visible action should be taken in such instances."

It also sought immediate restoration of mobile communications in the Valley and mobile internet services, saying "any prolonged clampdown on the telecom sector in the present day and age is an archaic, unimaginative and draconian approach to deal with public dissent and anger."

The memorandum said by blocking telecommunication with the "purpose of cracking down on criticism of the government and growing dissent against the administration has resulted in untold miseries and suffering in the Valley". "The clampdown on mobile telecommunications in the Valley continues without any indication of restoration of services by the government. This too has fuelled the sentiment of alienation and isolation in Kashmir," it said.

The NC demanded the judicial probe to fix responsibility for the crackdown on newspaper offices and printing presses, claiming that now the chief minister has denied her government's involvement in this repressive exercise.

"Legal action should be initiated in this matter and the state government should extend an unconditional, unequivocal apology to the local media for this unwarranted repression," the memorandum said.

The NC also expressed gratitude to Prime Minister Narendra Modi and the home minister for promptly responding to Omar's appeal to send eye-specialists to the Valley to treat hundreds of cases of young men and women, who sustained "potentially handicapping, lethal injuries due to the unrestricted and wanton use of pellet guns on protestors."

It sought all possible medical and financial assistance in the treatment of civilians who sustained grievous injuries, including specialised treatment outside the state.

While expressing strong condemnation of a "clear pattern" of excessive use of force on protestors across the Valley, the delegation informed the home minister that NC wasted no time in rising over partisan politics by reaching out to the state government "to lend our support to help and minimise the loss of young lives" despite having serious reservations about the state government's "inhumane, insensitive and chaotic response" to the situation in the Valley.

The delegation informed the home minister that the party's working President Omar Abdullah had made a timely and prompt public appeal to the chief minister to lead a political effort to normalise the situation in the Valley.

"It is tragic and condemnable that the chief minister and the state government did not respond to this appeal and expression of support when a collective, bi-partisan effort could have helped in the non-negotiable goal of preventing the loss of lives," they said.

Justifying its stand to boycott the All-Party Meeting, the delegation said the party did not want to be part of an elaborate "theatrical charade by the chief minister to compensate for her shocking lack of a sense of responsibility to deal with the situation in the State.

"We remain committed to helping the aggrieved and affected people and also playing an active role in any over- arching effort to normalize the situation in the Valley."

Maintaining that the PDP-BJP government had adopted a 'good cop-bad cop policy', the NC said on one hand state government spokesperson and Education Minister Naeem Akhtar went on record to re-affirm and justify the government's media gag, on the other the chief minister, through her Advisor Amitabh Mattoo, sought to "deny the existence of the media gag while publicly and ironically promising action against those responsible for 'miscommunication' and 'misrepresentation'".

"If this means possible action against the state government's spokesperson and education minister, or if this is just another elaborate enacting of the 'Good Cop–Bad Cop' trick to isolate the chief minister from the ramifications of assaulting the media and curbing the fourth estate -- is a question that remains unanswered," it said.