With a constable and a civilian succumbing to injuries on Sunday, the death toll in the ongoing unrest in Kashmir climbed to 47, while curfew remained in force in five districts of the Valley and some parts of the summer capital as a precautionary measure.

An uneasy calm prevailed in Kashmir where normal life was paralysed for the 16th consecutive day on Sunday even as security agencies braced for a march called by separatists on Monday. 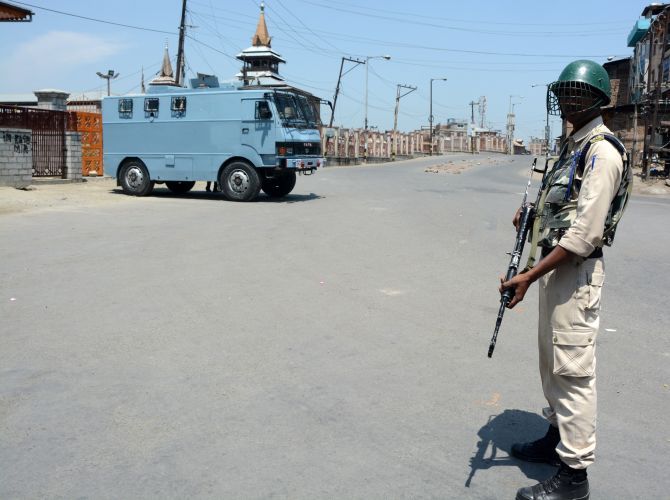 IMAGE: A security forces jawan stands guard at a deserted street during the 16th day of curfew. Photograph: Umar Ganie

While curfew has already been lifted from four districts - Bandipora, Baramulla, Budgam and Ganderbal, restrictions continue in these areas on the assembly of four or more persons, he said, adding the situation across the Valley is peaceful so far.

Constable Mudasir Ahmad and a civilian, Sameer Ahmad Wani, who were injured in clashes that erupted in the Valley following killing of Hizbul Mujahideen commander Burhan Wani in an encounter on July 8, succumbed on Sunday.

Mudasir is the second policeman to die in the violent clashes.

On July 15, a mob pelted stones at police station Yaripora in Kulgam. During the stone pelting, suspected militants hurled a grenade at the police station, resulting in injuries to six personnel including Mudasir. 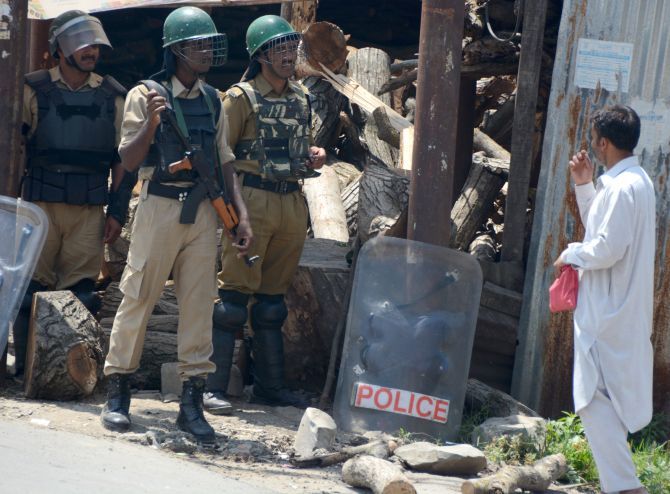 Sameer Ahmad Wani, a resident of Khonmoh area of Pampore in south Kashmir's Pulwama district, was injured during the violent clashes on July 10. He died during treatment at SKIMS Soura, a police official said.

Life in Kashmir has been paralysed since July 9, a day after Wani was killed in an encounter with security forces.

Separatists have been spearheading the agitation and called for a march to Anantnag town on Monday. IMAGE: A security personnel points to a barbed wire set up in prep for the 16th day of curfew in the city. Photograph: Umar Ganie

The security grid has geared itself to ensure that the march does not take place, the police official said.

He said police and CRPF personnel, who have already been deployed in strength at vulnerable spots across the Valley, have been directed to strictly implement the curfew and restriction.

Over 5,000 civilians and security personnel have been injured in the violent clashes between protesters and security forces following Wani's killing.