Top militant Mehrajuddin Wani, suspected to be involved in the 13-year-old Kandahar hijack case and having close links with underworld don Dawood Ibrahim, has been arrested in Kishtwar district by the Jammu and Kashmir police, which said he was a "big catch".

Mehrajuddin was among the first five militants who launched the militancy in J&K in 1987 and later crossed over to Pakistan occupied Kashmir in 1989 to get arms training and returned back after three months to start oprations in the state, Singh said. He belongs to militancy-hit Sopore town of north Kashmir and was a member of the United Jihad Council, an umbrella group of several militant outfits and had close association with its chief Syed Salahuddin and Dawood Ibrahim's D-company, he said.

During questioning, Mehrajuddin said that a diplomat of an unspecified embassy in Nepal was "deeply involved" in the 1999 hijacking of the Indian Airlines aircraft (IC-814) to Kandahar in Afghanistan.

"Mehrajuddin told interrogators that a diplomat of an unspecified embassy (in Nepal) was deeply involved (in the hijacking).  We are investigating all this," the IGP said, adding, "He is big catch for the security agencies."

"We suspect that Mehrajuddin's services have been used (in the hijacking). He knew about the hijacking -- he was there (in Nepal) when the aircraft was hijacked in 1999," Singh said.

In Delhi, Home Minister Sushilkumar Shinde said, "We have to confirm the reports. If correct, I congratulate the J&K police."

The aircraft, with 176 passengers on board, was hijacked by five Pakistani militants and forced to land in Amritsar, Lahore and Dubai before being taken to Kandahar, Taliban's bastion.

Rupin Katyal, one of the 176 passengers on board, was killed during the seven-day standoff. It ended with the Indian government swapping three terrorists including Maulana Masood Azhar, founder of Jaish-e-Mohammad, for the safe return of the hostages.

Police suspect that Mehrajuddin has strong linkages with Pakistan's Inter-Serviced Intelligence and is also believed to be engaged in raising funds for terror activities.

In reply to a question whether his name was mentioned in the challan produced by the Central Bureau of Investigation in the Kandhar hijack case, Singh said, "His name does not figure in the challan. He has acquired half a dozen fake names for various operations. So the investigations are on."

Police said with the help of the diplomat in Kathmandu, Mehrajuddin smuggled weapons, ammunition and fake currency into India.

During interrogation, Mehrajuddin has given details about his relations with Syed Salahuddin, Anees Ibrahim and Dawood Ibrahim, who figure in the list of 20 most wanted persons India has given to Pakistan, police said.

The IGP said that soon after Mehrajuddin returned from his training in PoK, he was arrested in Uri and sent to Kotbalwal Jail, where he came in contact with militants Syed Salludin, Nayeem Khan and Imran Rahi.

He was released and crossed several times to Pakistan on fake passports via Wagah border and also Nepal during the period to carry out the plans of militants, Singh said.

In Pakistan, he met top militants -- Bilal Sidiqee, Ehsan Dar, Javaid Guruad -- who motivated him set up bases in Delhi and other places in 1992. Mehrajuddin set up his network in Delhi, Saharanpur and Bangalore and carried out Hawala operations, IGP said. 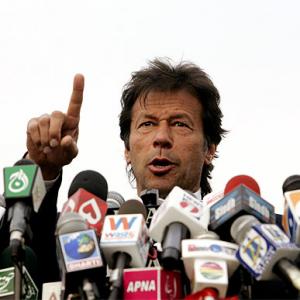