Dineshwar Sharma's visit to valley: Many favour talks with separatists 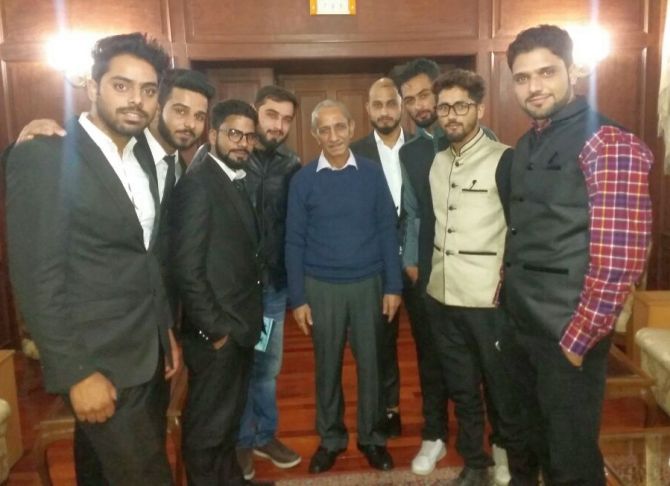 From the necessity of talking to Hurriyat separatists to appointing a tehsildar, Dineshwar Sharma heard it all during his visit to the valley, his first since being appointed the centre's point person on Jammu and Kashmir last month.

The former Intelligence Bureau chief, who left for Jammu on Thursday for the second leg of his visit to the state, met nearly 30 delegations during his stay in Srinagar, officials said.

Sharma, who arrived on Monday, was flooded with suggestions and requests, ranging from the serious to the mundane, they said.

Many of those who met him stressed the need to talk to separatist groups, including the Hurriyat Conference, a separatist conglomerate comprising moderate and hardline factions.

Some of the groups, especially from downtown Srinagar, said he must engage in discussions with separatists to make his mission successful.

Sharma had told reporters on Wednesday that he would try his best to meet the Hurriyat leaders when he visited the state next.

The groups, comprising mainly youths, emphasised that meeting political leaders from mainstream political parties may a necessity but those favouring separatist ideology should not be ignored, officials said.

The centre's special representative on Kashmir also met a group of youngsters, who termed themselves 'children of conflict' and wanted the rights and opportunities available to students in other states.

The group spoke about lack of opportunities in the state and said they are viewed with suspicion whenever they venture out of the valley, officials disclosed.

Some of the delegations that met Sharma highlighted lack of governance and the non-implementation of various central government schemes in the state.

Groups of migrants -- both Muslims and Hindus -- travelled all the way from Jammu to Srinagar to raise their demand for hiking the monthly relief amount, officials said.

In a surprise demand, some delegations demanded that television channels be reined in as they were instrumental in vitiating the atmosphere in the valley, deepening the divide and alienating people of this region from rest of the country.

Then there was a group from central Kashmir's Budgam that demanded a tehsildar. The state government, they said, had declared their area a tehsil three years ago but failed to appoint a tehsildar.

Sharma, officials said, assured them that their problems would be looked into by the state government.

According to one official, the youth were at least willing to converse with Sharma and he was given a "deep historical background" into issues facing the present generation for whom violence is par for the course.

There were also those who could not meet Sharma.

Like the "Rahul Gandhi fan club", which came to Hari Niwas, the state guesthouse near the Dal Lake where Sharma was meeting the delegations, but were turned away by the authorities.

During his stay in Jammu, Sharma is scheduled to call on state Governor N N Vohra and Chief Minister Mehbooba Mufti. He will also interact with delegations of political parties, including the Bharatiya Janata Party, trade representatives and other social organisations.