Kashmir an 'impediment' in Indo-Pak ties: US

In remarks that may ruffle feathers in New Delhi, United States Secretary of State Hillary Clinton on Monday said the Kashmir issue is an 'impediment' in developing a relationship that will be beneficial to both India and Pakistan.

"Kashmir (issue) that have divided India and Pakistan and in my view are impediments to developing a relationship that would be beneficial to both countries," she told a joint press conference with her Pakistani counterpart Shah Mehmood Qureshi.

She also made it clear that the US has no desire to mediate between India and Pakistan to settle the Kashmir issue which will have to be resolved by the two countries through negotiations.

With Clinton by his side, Qureshi raked up the Kashmir issue and said his country wants a sustained dialogue with India.

Qureshi, who has been blowing hot and cold against India in the last few days after a deadlock in the Indo-Pak talks, said, "Sustaining dialogue with India and finding a just solution of the Kashmir dispute" was part of the "convergent interest" of US and Pakistan.

While Pakistan has been insisting on discussing the Kashmir issue at all bilateral meetings with India, New Delhi has been maintaining that all issues can be taken up, but Islamabad should first address its core concern of terrorism emanating from the Pakistani soil against it.

New Delhi and Islamabad have held several rounds of discussions at high-levels on Kashmir under the Composite Dialogue which was suspended following the 26/11 Mumbai attacks.

During a town hall meeting with members of civil society later in the day, Clinton said: "We can only encourage, we can't solve (the Kashmir issue) because at the end of the day, this is an issue (to which) there is no dictated response."

The US cannot impose its decision on India and Pakistan or tell them what they must do to settle the Kashmir issue, she said.

"We continue to encourage, we try to arrange and facilitate but this is going to take a tremendous act of courage by the political leadership in both countries. There is no short-cut around it," she said.

Clinton aired similar views during an interaction with a panel of Pakistani television anchors, saying the US would encourage the dialogue between India and Pakistan as it is in the interest of both countries.

"I happen to think, on balance, it's even more in Pakistan's interests because (it will open markets in India)," she said.

Though officials of both countries have been meeting, the US wants to "encourage much more dialogue", Clinton said.

Clinton also told the TV anchors that there is a need to build more trust between Pakistan and Afghanistan while trying to work on long-standing issues between India and Pakistan.

The US will encourage the leadership of Pakistan and India to "persevere despite the (terrorist) attacks in both countries", she said.

Asked if the proposal to name former President Bill Clinton as a special envoy on the Kashmir issue was still on the table, Clinton said, "In order to have anyone play that role, both sides have to agree and that has not been the case as of now."

Responding to a question about the US condemning crackdowns on protesters in Iran and describing the demonstrations in Jammu and Kashmir as an internal matter of India, Clinton said there was a "big difference" between the situation in Pakistan and India and that in Iran.

"India and Pakistan have vibrant democratic institutions, a free press and independent judiciaries. We do not find any of them in Iran," she said.

While the Kashmir dispute is a "very important and difficult issue", India and Pakistan were not making threats against the rest of the world, she said.

"But in contrast, Iran is threatening all of its neighbours, is threatening to wipe countries off the map and is funding terrorism all over the world," she said. 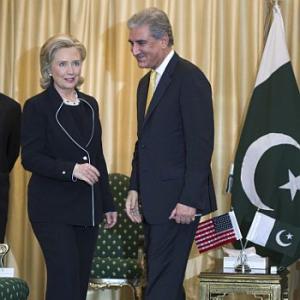