While Dravida Munnettra Kazhagam president M Karunanidhi, whose fifth term as chief minister nears completion, recalled his government's achievements, All India Anna Dravida Munnetra Kazhagam chief Jayalalithaa used the opportunity to call for a change of guard in the state.

Karunanidhi said his government's initiatives like the new Assembly-Secretariat complex in Chennai, the five-day World Classical Tamil conference in Coimbatore, celebrations to mark the 1000th year existence of the temple at Thanjavur among others were the 'proud moments' of his performance in the year gone by.

"Our flagship programmes such as providing one kg rice at Re one in PDS shops, financial assistance to pregnant women, reservations for Muslims and Arundthayar communities, the Kalaignar housing scheme among others have received accolades from many quarters," Karunanidhi said in an official release.

Extending his New Year greetings, he said with a view to "continue serving the people in the New Year (2011) and ensure the development of Tamil Nadu, we will continue our winning streak."

Jayalalithaa, who had on Thursday informed her party's general council that she was in talks with other parties to ensure an alliance that her party workers were aspiring for, asked the people to work towards ensuring a 'true people's rule'.

"Let democracy flourish (in 2011). On the New Year day, we should resolve to strive towards ensuring a true people's rule," she said in a party statement. 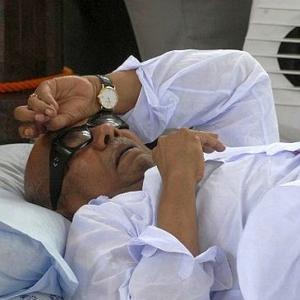 Worrying signs for Karunanidhi and co in 2011