Backing a seperate Eelam (homeland) for Sri Lankan Tamils, Dravida Munetra Kazhagam president M Karunanidhi has reiterated his demand for India's role in this regard as he sought reviving Tamil Eelam Supporters Organisation.

Addressing a public meeting at Kolathur,the constituency of his son and party treasurer MK Stalin last night,he called for a peaceful and democratic struggle to achieve this purpose.

"The Sri Lankan President may reject the idea, but it will be my endeavour," he said.

The DMK patriarch, associated in the 1980s with TESO which ent into oblivion later, sought its revival with the help of leaders, including Dravidar Kazhagam president K Veeramani.

He reiterated his demand for a referendum for this purpose by the United Nations and India, an issue he has raised repeatedly in the last few days. He had said he was not asking for a military intervention by India like it did in the Iiberation of Bangladesh. 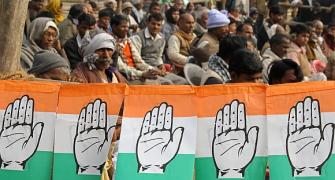 UP poll debacle: Is Congress worried about other states?
Sri Lanka stops short of calling Karunanidhi a terrorist