A committee was set up after the Bharatiya Janata Party’s IT cell chief announced in a tweet the schedule for the Karnataka assembly polls before the official declaration on March 27.

An in-house committee set up by the Election Commission to probe the alleged leak of Karnataka poll schedule minutes before the official announcement, said on Saturday the information was not leaked but mere speculation.

The EC had set up the committee after the Bharatiya Janata Party’s IT cell chief announced in a tweet the schedule for the Karnataka assembly polls before the official declaration on March 27. He, however, had got the date for counting of votes wrong.

The committee noted that the media has speculated election schedules before and it seemed similar attempts were made in the case of Karnataka elections.

“As pointed out by (a private TV channel) in its response... the alleged leak was not a leak and was merely speculation. Thus, the committee is of the opinion that there was no leak of schedule of elections to Karnataka Legislative assembly 2018,” the committee said it its report.

The TV channel had stated it had accessed the details of the poll schedule from informed sources and, given that the information was not entirely accurate, it was obvious that it was not a leak.

The committee, in its report, said the official announcement of schedule is integral to the electoral process.

“It is the responsibility of all the stakeholders including media and political parties not to attempt any speculation that may create unnecessary doubts in the minds of our stakeholders and citizens at large. The commission may like to convey this concern to the stakeholders in its future interactions,” the report said.

The committee is of the view that the existing system is robust. “However, considering the secrecy of the process the committee will separately brief the commission for further strengthening the process, if required,” it added.

Ahead of the official announcement on March 27 by Chief Election Commissioner O P Rawat, BJP IT-cell chief Amit Malviya had tweeted that voting will be held on May 12 and the counting will take place on May 18.

He was correct about the day of voting, but got the counting date wrong. The counting will take place on May 15.

The panel said Malviya, in another tweet, had attributed a news channel as his source.

In his press conference to announce the poll schedule, Rawat had described the leak as a “very serious” issue that merited a probe and “stringent action”.

Immediately after Malviya’s tweet, the Congress said: “BJP becomes the ‘Super Election Commission’ as they announce poll dates for Karnataka even before the EC. Credibility of EC is on test.”

The committee has noted that the information of alleged leak appeared in public domain for the first time at 11.06 am. 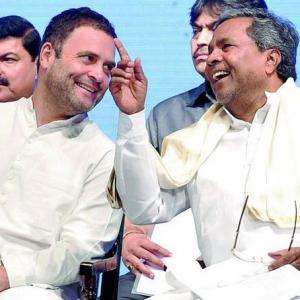