News
Business
Movies
Sports
Cricket
Get Ahead
Money Tips
Shopping
Sign in  |  Create a Rediffmail account
Rediff.com  » News » 'He will live on in the hearts and minds of lakhs of devotees' 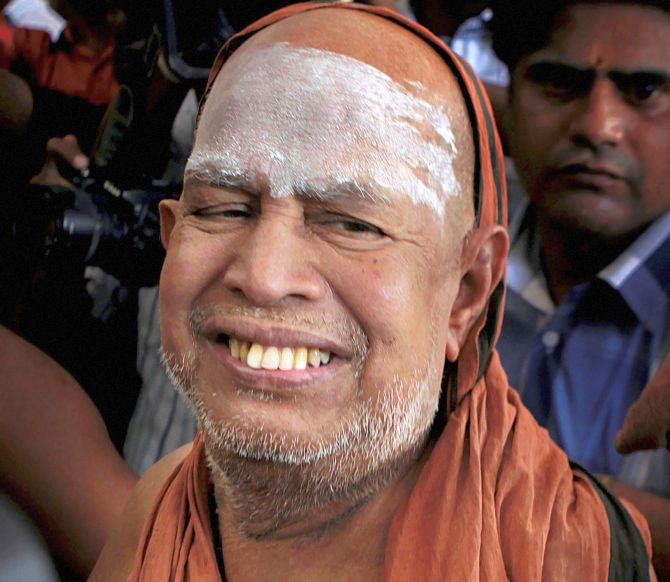 IMAGE: Kanchi Shankaracharya Jayendra Saraswathi, hailed as a social reformer, complained of uneasiness on Wednesday morning and was rushed to the nearby Adi Bhagavadpada Cardiac and Dialysis Centre where he breathed his last. Photograph:PTI Photo

Kanchi Shankaracharya Jayendra Saraswathi, hailed as a social reformer and known for his efforts for resolution of the vexed Ramjanmabhoomi-Babri Masjid dispute, died at a hospital in Kancheepuram on Wednesday at the age of 82.

The Hindu seer, who was the 69th acharya of the mutt, which many believe was founded by Adi Shankaracharya himself nearly 2,500 years ago, had his share of both glory and controversy, as he was arrested in 2004 connection with the murder of a temple manager. He was acquitted by a sessions court in the case in 2013.

Jayendra Saraswathi had been unwell for the past few months. He complained of uneasiness on Wednesday morning and was rushed to the nearby Adi Bhagavadpada Cardiac and Dialysis Centre, a facility sponsored by the Kanchi Kamakoti Peetam. He breathed his last at the hospital, according to mutt officials.

His mortal remains, in a traditional seated posture as followed for seers, have been placed at the mutt for people to pay their last respects.

Condolence poured in for the revered seer, with many recalling his contribution to philanthropic activities and his efforts to reach out to Dalits and other socially backward communities.

According to officials, the body will be kept for people to pay their respects till Thursday morning before it is taken for last rites. 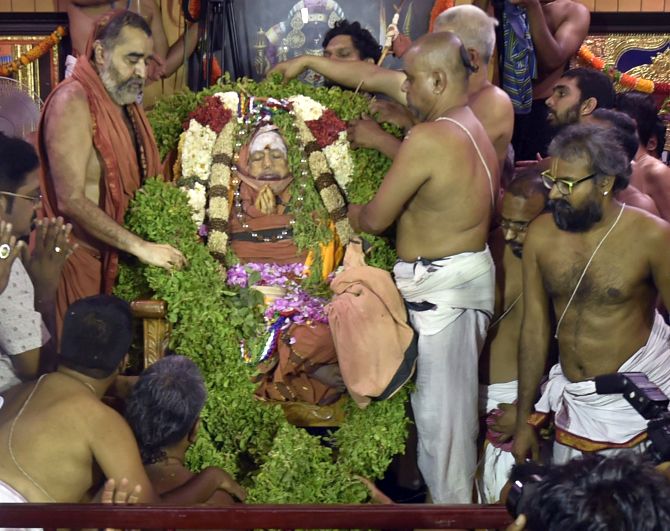 IMAGE: Kanchi Shankaracharya Jayendra Saraswathi's body has been kept for people to pay their respects till Thursday morning before it is taken for last rites. Photograph: PTI Photo

The body will be laid to rest adjacent to his predecessor within the mutt premises on Thursday, its manager Sundaresa Iyer said.

“Tomorrow morning at 8 am we will be starting the formalities as per the rules of the mutt. Rituals will be performed similar to the way they were done for Mahaperiyava (Chandrasekarendra Saraswathi)”, he told reporters.

Born as Subramanian in Irulneeki village in Tiruvarur district, Jayendra Saraswathi was appointed as junior pontiff of the Kanchi Kamakoti Peetam in 1954 by Chandrasekarendra Saraswathi at a young age of 19.

Jayendra Saraswathi was credited for his outreach to various sections of the society.

Once considered close to the late Chief Minister J Jayalalithaa, he even attempted at finding an amicable solution to the Ramjanmabhoomi-Babri Majid issue.

He held discussions with stakeholders on both sides in 2003, during the then Bharatiya Janata Party-led National Democratic Allianceregime at the Centre but could not make much headway. 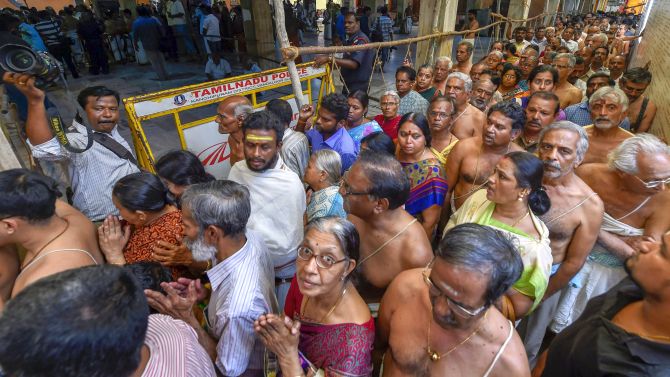 IMAGE: People wait in long queue to pay their last respects to Jayendra Saraswathi Shankaracharya, 82, the 69th pontiff of the Kanchi Mutt, who died on Wednesday. Photograph: PTI Photo

The pontiff had earlier courted controversy in 1987 when he suddenly disappeared from the mutt, only to be found out later.

However, his most challenging period came in 2004 when he was arrested on eve of Diwali in connection with a murder of a temple manager, A Sankararaman, during the Jayalalithaa regime.

The trial court had later acquitted him and others including his deputy Vijayendra Saraswathi in the case. Sankararaman, manager of the Sri Varadarajaperumal temple, was brutally murdered in his office room in the temple on September 3, 2004.

He had levelled charges of financial misappropriation in the mutt administration against Jayendra and Vijayendra Saraswathi. The two seers were booked for murder and criminal conspiracy under the Indian Penal Code. Jayendra Saraswathi was arrested on November 11, 2004, from Mahbub Nagar in Andhra Pradesh.

They later moved the Supreme Court and got the case transferred to Puducherry in 2005 on grounds that the atmosphere in Tamil Nadu was vitiated and there may not be free and fair trial.

In November 2013, the Puducherry sessions court acquitted both the seers. Besides them, 21 other accused were also acquitted by Puducherry Principal District and Sessions Judge CS Murugan.

“Sad to hear of the passing of Jayendra Saraswatiji, the Shankaracharya of Kanchi Kamakoti Peetam. Our country has lost a spiritual leader and social reformer of rare eminence, My condolences to his countless disciples and followers,” President Kovind said on Twitter.

Naidu and Modi expressed sadness at his demise, saying he will live on in the hearts and minds of devotees due to his exemplary service to society.

“Deeply anguished by the passing away of Acharya of Sri Kanchi Kamakoti Peetam Jagadguru Pujyashri Jayendra Saraswathi Shankaracharya,” Modi said in a tweet.

“He will live on in the hearts and minds of lakhs of devotees due to his exemplary service and noblest thoughts. Om Shanti to the departed soul,” he added.

Congress president Rahul Gandhi said he was “saddened to hear about the death of the Shankaracharya.

“He was revered by lakhs of believers all over the world for his teachings. May his soul rest in peace”, Gandhi said. Kanchi seer will be remembered for his outreach to all