Biden, 77, made his maiden public appearance with his running mate Harris on Wednesday and said that both of them are ready to get to work in rebuilding America and a better future for its people.

"Kamala, as you all know is smart. She's tough. She's experienced. She's a proven fighter for the backbone of this country, the middle class, for all those who are struggling to get into the middle class. Kamala knows how to govern," Biden said.

"She knows how to make the hard calls. She's ready to do this job on day one. And we're both ready to get to work rebuilding this nation and building a better," he said making a joint appearance with Harris in Wilmington, DC.

The announcement resulted in enthusiasm among the party's base.

"Yesterday we had our best grassroots funds raising day of the campaign, more than double our previous record. And in doing so, we set a single day record for online political fundraising, and I think I know why," he said.

Biden raised $26 million for his presidential campaign in the 24 hours that followed his announcement on picking Harris to be his running mate.

"This morning, all across the nation little girls woke up, especially the black and brown girls who so often feel overlooked and undervalued in their communities, but today just maybe they're seeing themselves for the first time in a new way, as the stuff of a president and vice presidents," Biden said.

"Growing up in Scranton and Claymont, Delaware, I saw that struggle with my family as well. Kamala saw it with hers as well. And millions of Americans are living that struggle as we speak, especially in this moment of crisis, especially with so many jobs lost," he said.

As the child of immigrants, Biden said, Harris knows personally how immigrant families enrich the country, as well as the challenges of what it means to grow up black and Indian American in the United States of America.

"Her story is America's story, different from mine in many particulars, but also not so different in the essentials. She has worked hard. She's never backed down from a challenge, and she has earned each and every of the accolades and achievements that she has gained, many of them often in the face of obstacles that others put in her way, but never quit," he said.

As attorney general of the largest state in the country, Harris took on the big banks over mortgage fraud and won, later also took on big oil when it wanted to pollute without consequences, he said.

"She was a pioneer in marriage equality and tackled the gun lobby. You know, we've all watched her in the United States Senate go toe to toe with Trump officials trying to hide the truth, asking the tough questions that needed to be asked and not stopping until she got an answer. And when none was forthcoming, it was obvious what the answer was," Biden said.

"As a member of the Intelligence Committee and the Judiciary Committee, she's been the center--in the middle of the most critical national security challenges our country faces, well aware, well aware of all the threats to this nation and ready to respond to them," said the Democratic party's presidential nominee. 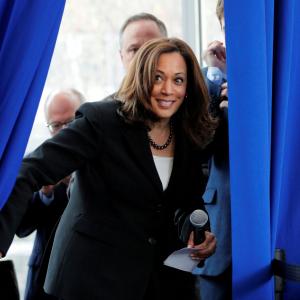