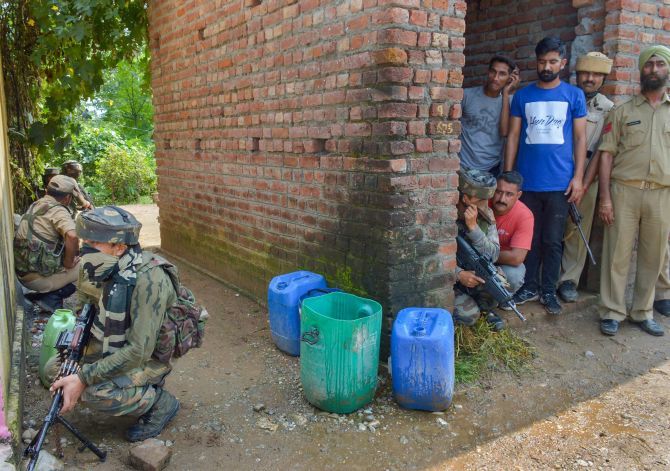 IMAGE: Army personnel take position during a search operation on the second day after a terrorist attack on a CRPF post at Jhajjar Kotli on Srinagar-Jammu National highway. The terrorists were located near a house in Reasi district's Kakriyal area on Thursday and an encounter ensued. Photograph: PTI Photo

Five terrorists of pro-Pakistan Jaish-e-Mohammed were killed -- including one of its oldest terrorists nicknamed 'Ali' -- in two separate encounters in Reasi and Sopore on Thursday, while 12 security personnel, including three officers, were also injured in the former operation.

The action comes a day after the three terrorists killed in Reasi fired on a police party and escaped, officials said.

Police said the terrorists of Pakistani origin had crossed the International Border (IB) in Tarnah nallah and reached Kashmir from the Dayalachak area of Kathua district in a truck.

The encounter broke out after security forces, comprising Central Reserve Police Force, police and Army personnel, during a cordon and search operation, zeroed in on a location near a house in Reasi district's Kakriyal area, and surrounded the terrorists Thursday afternoon, they said.

Drones and choppers were used in the operation launched on Wednesday to track the terrorists, all of whom were aged between 18 and 22, they said.

12 security personnel were injured in the operation, police said. Six CRPF personnel, including the deputy commandant and the assistant commandant, five cops, including Deputy Superintendent of Police Mohan Lal, and an Armyman were injured, they said, adding that they were admitted to the Narayana hospital in Katra.

'On 12.09.2018 at about 0805 hours, during checking by flying squad of police at Domail on highway, police party signalled a truck bearing No. JK03-1476, which was on its way from Jammu to Srinagar to stop. In the meantime, three terrorists who were on board the said truck opened fire (sic),' a police statement issued Thursday said.

Earlier, Senior Superintendent of Police (Jammu) Vivek Gupta said the cordon and search operation to track down the terrorists was launched in the Jhajjar-Kotli forest belt in Jammu and Reasi districts after the terrorists fired on the security personnel on the Jammu-Srinagar National Highway on Wednesday. The terrorists had fled into the forest belt of which Kakriyal is a part.

One person was injured in the firing. The truck was seized, and its driver and helper were arrested, police said, adding that one AK-56 rifle, loaded magazines, one Chinese pistol and other incriminating material were recovered from the site.

The operation was launched in the villages near Katra, they said, adding that the security components of the Vaishnodevi shrine were also alerted.

A lookout notice was issued through social and mass media, they said.

Three SSPs of Reasi, Udhampur, Jammu, additional SP of Katra and the SDPO of Nagrota rushed to the spot after receiving information about the presence of terrorists in Jhajjar-Kotli, police said.

The vast area was kept under tight cordon during the night and with day break, contact was established after the terrorists were tracked at Kakriyal, they said.

"The exchange of fire continued till 5 pm this evening. In this encounter, all the three terrorists were neutralised. SDPO Nagrota, two officers of CRPF and some police and security force men were injured," a police spokesperson said.

"It seems to be a case of fresh infiltration of yesterday morning from Pakistan most likely from Hiranagar belt of International Border. These terrorists had come from Pakistan," he said.

Preliminary investigation suggests that the terrorists belonged to the JeM. Bodies of all three have been found, he said, adding that arms and ammunition were recovered from them. The duo had been engaged in carrying out such acts in the past, and police were investigating their contacts in Jammu, the IG said.

During the operation, security agencies were informed by a villager that the terrorists had taken food and clothes and left his house on Wednesday night, a senior police official said.

Speaking to reporters, the villager said, "They came to my house at 8 pm and demanded clothes to change from their(combat) dress. They demanded food. They ate biscuits and drank water and left around 9.10 pm."

The terrorists also demanded a vehicle, but 'we told them, we do not have one', the villager said, adding that they were asked to switch-off their mobile phones.

The official said the family immediately informed police after the terrorists left.

The CRPF, the police and the army along with personnel from other security agencies are combing the area, he said. 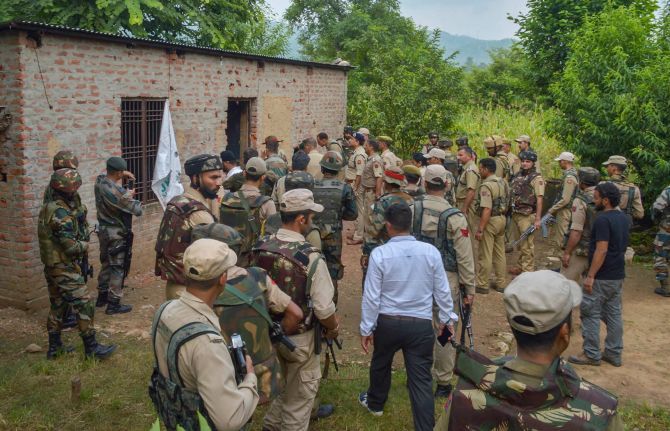 IMAGE: Security personnel near the house where terrorists were holed up during the encounter in Reasi. Photograph: PTI Photo

The official said areas and check posts along the Jammu-Srinagar national highway are on alert.

More checkpoints have been created and vehicles are being searched and passengers frisked, he said.

"The Jhajjar-Kotli forest belt and adjoining areas have been put under a massive cordon," the official said.

Traffic movement on the highway, between Nagrota and Jhajjar-Kotli, was suspended.

Jaish-e-Mohammed also suffered a jolt in Sopore when security forces killed two of its members on Thursday.

Located 60 kilometers from Srinagar, Sopore, the apple town of the Valley, witnessed a heavy exchange of fire early on Thursday after police and other security forces cordoned off a house in the Chinkipora area.

There was credible intelligence about the presence of Jaish terrorists and forces were deployed. The terrorists opened indiscriminate fire, resulting in an encounter.

In the gunfight, the security personnel killed Ali alias Athar and Zia-ur-Rehman. They belonged to Pakistan, police said. Ali, who had infiltrated into the Valley in 2014, was one of the oldest terrorists of the Jaish-e-Mohammed and was involved in the killing of civilians, attacks on security forces and detonating Improvised Explosive Devices in north Kashmir.

Ali was the mastermind of the IED explosion in January this year in which four policemen were killed, they said.

37 terrorists of the Jaish-e-Mohammed have been killed this year. They included Mufti Waqas, the terror group's chief operation commander, and Mehmood, its north Kashmir commander.

During Thursday's gunfight, police evacuated civilians from the encounter site to safer areas before engaging the terrorists, they said.

Some arms, ammunition and incriminating material were recovered from the the encounter site, a police spokesman said.

Police also recovered fake Aadhaar cards from the killed terrorists which might have been used by the duo to conceal their identity.