Jaya laid to rest amid chants of 'Long Live Amma'

Lakhs of grieving men and women on Tuesday bid a tearful adieu to J Jayalalithaa, the charismatic Chief Minister who held sway over Tamil Nadu politics for more than three decades with a pro-poor image, as the All India Anna Dravida Munnetra Kazhagam supremo was buried here with full state honours. Sasikala Natarajan, the close confidante of Jayalalithaa for over three decades, was beside the body throughout the day and later conducted the religious rituals before the sandalwood casket was lowered at a site close to MGR memorial on the shores of Marina Beach.

No sooner had the brief rituals concluded at around 6 pm, the casket carrying the mortal remains of the five-time chief minister was lowered after a gun salute amid emotional chants of ‘Amma Vazhga’ (Long Live Amma) by a sea of humanity which had converged at the burial site.

Various leaders including Naidu, Rao, Gandhi, Leader of Opposition in Rajya Sabha Ghulam Nabi Azad, Paneerselvam, Speaker Dhanapal and former Governor K Rosaiah placed wreaths at the feet of the body that was draped in a silk saree in her favourite green colour and a sandalwood garland placed around her neck. Earlier, thousands of people hailing ‘Puratchi Thalaivi Amma’ (Revolutionary Leader Amma) walked with the cortege that was part of a military convoy in which her coffin was carried, wrapped in the national flag and covered with flowers.

Amid heavy security cover, the funeral procession made steady progress to the destination, a distance of 3 km from Rajaji Hall in the government estate, passing through MadrasUniversity and the burial site opposite the British-era iconic People Works Department building.

Big photographs of Jayalalithaa, an actor-turned-politician, were placed all around the coffin even as people showered the hearse with flowers, as Sasikala accompanied the body.

With the central government ordering a state funeral, personnel from the three armed forces paid their respects and gave a guard of honour before Sasikala conducted the last rites with the aid of a Brahmin priest.

The rituals include sprinkling of water, offering of rice, showering of flower petals and sandalwood pieces.

Jayalalithaa, a spinster who never shied away from flaunting her religious identity and beliefs, was surprisingly buried and not cremated. She was laid to rest by the side of her mentor and actor-turned politician M G Ramachandran, a former chief minister.

Lakhs of people had packed the area around Rajaji Hall where men and women wept in grief as they attempted to reach the body of their Amma or ‘mother’.

The mortal remains of Jayalalithaa was earlier taken from her Poes Garden residence to Rajaji Hall, hours after she died at a private hospital late last night after battling for life for 75 days. 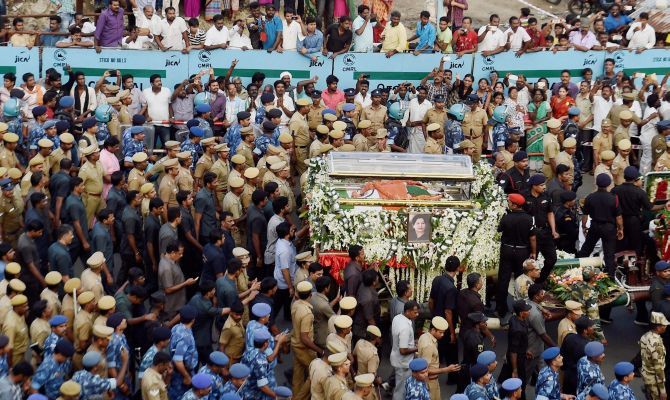 In death too, Jayalalithaa was in her favourite green-colour saree.

When her body was taken from her PoesGarden residence early on Tuesday morning to Rajaji Hall, it was draped in her trademark green saree, though with a red border.

It was green all the way. When she was sworn in as chief minister for a sixth time after emerging triumphant in the May 16 assembly polls, she was wearing a green saree.

Also, when she took oath as chief minister for the fifth time on May 23 last year after being acquitted in the disproportionate assets case by the Karnataka high court, she donned a saree of the same colour.

According to some AIADMK workers, green was Jayalalithaa’s lucky and favourite colour.

The AIADMK supremo had chosen to retain the same green colour and embroidered design as her attire while making her first public appearance in nearly eight months when she returned to power after being forced to quit over corruption charges.

The Madras University Centenary Auditorium where she took oath had shiny green backdrop decorations. The bouquet of flowers which was offered by her to the then Governor K Rosaiah also had green outer covering sheets.

The green pen with which she signed the papers after being sworn in as chief minister last year and the glittering green stone in her ring had also stood out. Over two tonne of flowers from several destinations were used by about 40 workers who worked for 10 hours to prepare the Army truck and gun carriage for the final journey of Jayalalithaa.

The flowers were of two varieties, one being the decorative kind, including cut flowers like zebra plant, asparagus and daisy and the other, more traditional varieties like rose and white marigold (vellai samandi in Tamil).

Working at a brisk pace, knitting garlands to decorate the army truck and gun-carriage, Velu, a senior florist from Koyambedu market said a total of ‘well over 2,000 kilos of flowers’ were used for making garlands and flower hangings. The garlands were used to on the army truck, the gun carriage and the memorial site for Jayalalithaa.