Dr Jay Narayan has won the 2011 Acta Materialia Gold Medal and Prize, an international award given to one person annually for exceptional research contributions and leadership in materials science worldwide.

Narayan, the John CC Fan family distinguished chair professor of materials science and engineering, North Carolina State University, won the award for critical discoveries about the ways that minute variations in the atomic structure of materials affect their electrical and optical properties.

With 'more than 500 journal papers and 11,000 citations, 35 patents, at least a dozen major awards and honors, and the fastest-ever combined master's and doctorate from a major research university, he might be the Michael Jordan of microelectronics. And yet he doesn't even have a page on Wikipedia,' the Chronicle noted.

An alumnus of the Indian Institute of Technology- Kanpur in 1969, he earned an MS and PhD from the University of California, Berkeley.

An international conference on advances in nanostructured materials and applications will be designated as a symposium honoring him, in October in Columbus, Ohio. The medal will be presented at the ASM awards ceremony at the event. The Materials Research Society will hold an invited symposium in his honor in San Francisco in April 2011.

Another of his innovations involves using pulsed laser beams to guide the arrangements of the layers of atoms in a material. An industry partner is using the technique to build a new generation of light-emitting diodes, for use in flashlights, traffic signals, and brake lights.

'Eventually,' the Chronicle noted, 'the method could mean computer storage chips that require only a few hundred atoms for each bit of information, allowing the storage of about 250 million pages of data on a chip measuring less than a half-inch on each side.'

Narayan was recognized for his fundamental contributions in defects, diffusion, ion implantation and laser-solid interactions, which have led to major materials breakthroughs. They include the formation of p-n junctions and solar cells by laser-beam processing; defect-free annealing of semiconductors; and a laser method for forming supersaturated semiconductor alloys, and hydrogen-free diamond and diamond-like films.

Narayan worked as a research metallurgist at the Lawrence Berkeley National Laboratory, before joining Oak Ridge National Laboratory in 1972 as a member of its research staff. He rose to senior scientist and group leader of thin films and electron microscopy programs, before joining North Carolina State University in 1983 as senior professor and director of the Microelectronics Center of North Carolina. He was appointed distinguished university professor in 1991, and endowed Fan family distinguished chair professor in 2001.

He has developed seven graduate courses over his 27 years of tenure at NC State, two of which he teaches online for students at NC State as well as those in the industry. He has turned down various offers from major research institutions to stay on at North Carolina State University, primarily because the Raleigh area reminds him of his hometown in India. 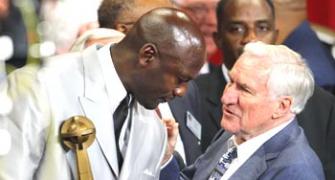