Akal Takht head Gurbachan Singh's customary address on the occasion of Diwali drowned in the din on Wednesday amid slogan shouting by Sikh hardliners, even as parallely "appointed" jathedar of Akal Takht also managed to address the gathering but was arrested soon after. 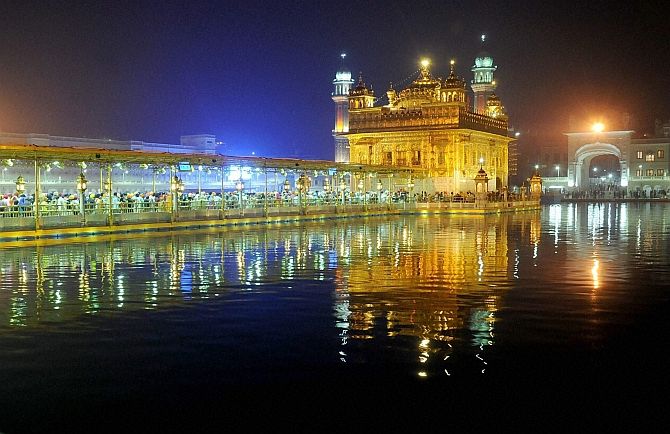 Amritsar Commissioner of Police Jatinder Singh Aulakh said,"Dhian Singh Mand, a former MP of SAD(A), was arrested on Wednesday evening from inside the Golden Temple."

Since Hawara is in prison, Mand was to take charge as jathedar of Akal Takht, as per the hardliners.

Mand delivered his address in front of the Darshani Deodi (entrance of the Golden Temple). He gave an appeal for social boycott of Badals.

Sikh protesters brandished swords and waved black flags in Golden Temple complex. However, no one was hurt in the melee.

Gurbachan in his address said that "what the Sikh gathering did yesterday at Chhaba village has hurt the sentiments of the community and shaken it deeply."

"These forces have created an unrest among the community," the Akal Takht head said.

Speaking on the incidents of sacrilege of Guru Granth Sahib, Gurbachan said that the state government must ensure round the clock surveillance of Sikh shrines.

"Sikh warriors imprisoned since long must be released forthwith," he demanded while asking the Centre to take a decision on the issue at the earliest.

Earlier, several leaders of hardline Sikh groups were detained here ahead of their proposed march to Golden Temple to address Sikhs on Diwali, a day after they had "appointed" Jagtar Singh Hawara, the convict in Beant Singh assassination case, as jathedar of Akal Takht.

Apart from Akal Takht, which is the supreme temporal seat of the Sikhs, the yesterday's congregation (Sarbat Khalsa) also "removed" jathedars of two other Takhts -- Takht Kesgarh Sahib and Takht Damdama Sahib.

On Tuesday's congregation had accused the incumbent Sikh head priests, appointed by SGPC, of not keeping up the dignity and traditions of Sikh institutions.

The 'Sarbat Khalsa' was organised at Chabba village, about 10 kms from the holy city, to "free" Sikh institutions from political influence.

The Akal Takht -- top temporal seat of Sikhs and SGPC -- has already disapproved the congregation maintaining it holds sanctity only if it is held at Golden Temple premises under the head of Akal Takht.

The state government, which has faced back-to-back protests over loss of crops by farmers; and by locals over alleged desecration incidents of Guru Granth Sahib, had turned the holy city into a fortress with heavy security arrangements.

The Sikh clerics led by Akal Takht head have been in the eye of storm after their pardon to the Dera head.

Meanwhile, amid the simmering tension in Amritsar after the Sarbat Khalsa, the Golden Temple not only witnessed a mild fall in number of pilgrims but also a thick security blanket thrown around the holy shrine.

The Plaza outside the Golden Temple, which is normally packed with pilgrims, this Diwali witnessed deployment of Rapid Action Force (RAF) and Punjab police cops, numbering around 250.

A major reason for the mild fall in number of pilgrims visiting the shrine was due to the SGPC's decision of not celebrating Diwali this year due to the incidents of Guru Granth Sahib sacrilege.

The security was beefed up inside the shrine as well. Not only the policemen and intelligence officials were seen in plain clothes, SGPC's task force too was maintaining a tight vigil outside the Akal Takht.

The SGPC had also called in its employees who were on leave to ensure that the day passes off peacefully.

Meanwhile, Prime Minister Narendra Modi, who visited the border area to meet army personnel on Diwali, returned to Delhi. His itinerary did not include visit to the Golden Temple.