Two men, who were apparently part of a demonstration by Jamia Millia Islamia students on Sunday, have been admitted to the Safdarjung Hospital with "gunshot injury", sources said on Monday. 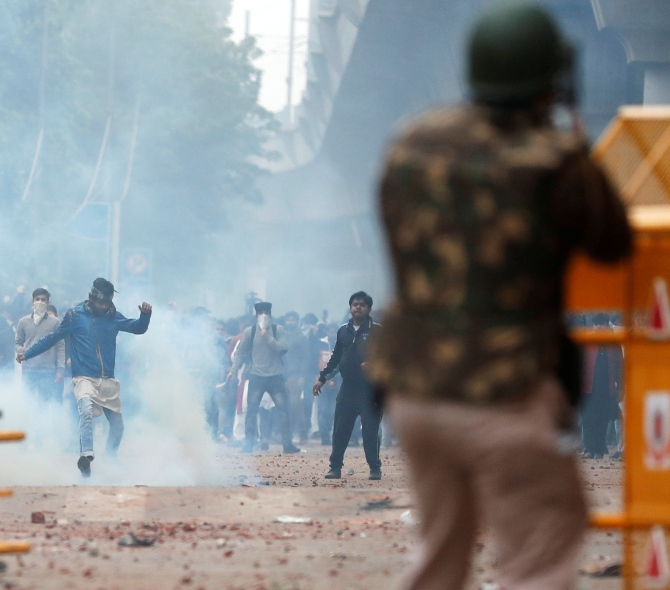 IMAGE: A protester kicks a tear gas shell during a protest against the Citizenship Amendment Bill, a bill that seeks to give citizenship to religious minorities persecuted in neighbouring Muslim countries, outside the Jamia Millia Islamia University in New Delhi. Photograph: Adnan Abidi/Reuters

The father of one of students, Sohaib Khan, 23, said his son was not part of the protest but was passing by when he was hit by a "pellet" on toe.

"He underwent surgery last night and was shifted to a ward," Mohammad Arshad said.

Sohaib is a 4th-year BTech student at Jamia Hamdard, his father said.

Another student, 22-year-old Ajaz who also suffered gunshot injury on the chest apparently at the protest site, was also undergoing treatment at the Centre-run hospital.

"No bullets fired": Delhi cops on injuries to Jamia students

The crime branch will investigate the Jamia violence and people should not pay any heed to social media rumours, the Delhi Police said on Monday and insisted that there was no firing during the incident.

According to Delhi Police's Public Relations Officer MS Randhawa, the force used "maximum restraint, minimum force" despite being "provoked" by protesters and did not carry any firearms.

"There was no firing, there have been no casualties in the Jamia violence. The crime branch will investigate the violence. Thorough investigation will be done and accountability will be fixed," he said at a press conference.

"Four DTC buses, 100 private vehicles and 10 police bikes were damaged during the violence. One policeman is in the ICU," he added.

Thirty-nine people were brought to hospital where their medical examination was conducted, the Delhi Police PRO said.

Randhawa said police are keeping a watch on social media and all CCTV cameras will be scanned and videos circulated on social media will also be analysed and strict action will be taken.

"We are monitoring social media. I appeal to students and public at large to not pay any heed to rumours," he said.

The officer said the protest at Jamia started on Friday and proper arrangements were in place with picket deployment in Sarai Jullena and Sukhdev Nagar.

When students arrived at these places, they were stopped and they even tried to push the policemen who exercised maximum restraint, Randhawa said. These students left the spot after a while, he said.

The protests followed on Saturday but police used maximum restraint after which the demonstrators left the spot, the officer said.

On Sunday, the protests started around 2 pm and residents of the area also joined the students. The protest took place in Jamia Nagar and adjoining areas, police said.

"The protesters then marched towards Sarai Jullena, but our staff was deployed there and proper arrangements were made. The protesters were provoking but we used maximum restraint," Randhawa said.

Around 4.30 pm, some of the protesters changed the route and headed toward Mata Mandhir Marg in the New Friends Colony area which is also a residential area.

After reaching there, when police tried to push them, they resorted to vandalism.

"We started getting calls from panic residents. We used minimum force when protesters torched buses," he said.

Police were pelted with stones when they tried to push the protesters back towards Jamia Nagar. The Jamia campus is not unified and it is situated on both sides of the road, when violence erupted there, bottles, bulb and tube lights were also thrown, the police PRO said.

"The situation was later brought under control. At least 30 police personnel, including DCP rank officers, suffered injuries and one of them is still in the Intensive Care Unit," he said.

Some students were detained when police were chasing protesters and trying to push them towards Jamia Nagar. Later, they were released after verification, Randhawa said.

"One of the videos viral on social media shows police personnel setting vehicles on fire, however, it was just a spark and policemen were containing it immediately with available resources. The bus did not suffer any damage and it was safely removed from the scene," he added.

When asked if police entered the girls' hostel, the officer denied the charges and said the force only entered the administrative block of the varsity.

Police said they are in talks with the university administration and student associations regarding the incident. 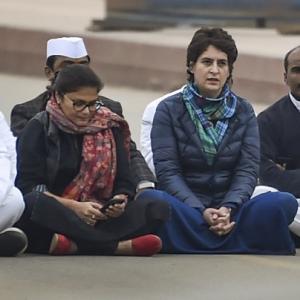