Protests demanding Jallikattu swelled on the streets of Tamil Nadu after agitators rejected statements by Prime Minister Narendra Modi and Chief Minister O Panneerselvam and the state braced for a shutdown on Friday. 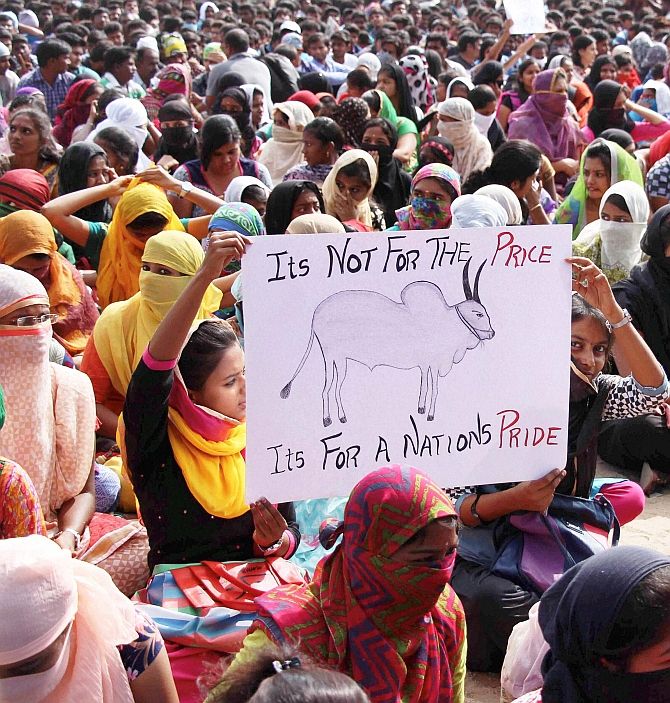 Late Thursday evening, reports indicated that the state government could consider promulgating an ordinance to ensure holding of Jallikattu or convene the assembly for adopting a resolution in its favour.

In a virtual replay of the anti-Hindi agitation of 1960s, lakhs of students and youths took leadership of the peaceful protests across the state, while agitators in Madurai, the main area which has been hosting Jallikattu sport for centuries, stopped trains pressing for their demand.

Businesses, theatres, schools and transporters have declared a day-long strike on Friday supporting the demand for immediate permission to allow Jallikattu.

More eminent personalities like chess wizard Viswanathan Anand and music maestro A R Rahman extended their support. Rahman will sit on a day-long fast on Friday.

At the epicentre of the agitation Marina, the protesters rejected the statements of Modi and Panneerselvam saying these were known excuses and disappointing.

On the third night of the protests, the students including those from schools, youth and women expressed their determination not to leave their protest sites unless the age-old sport is allowed. The sea of youths continued to swell on the Marina beach for the third day today and staged protests in multiple forms like forming human chains, taking out motorcycle rallies, playing folk music, dancing, singing and holding skit.

Tamil Nadu traders' federation, led by A M Vikramaraja and unions of auto-rickshaw and taxis operators and cinema houses announced a shutdown on Friday. Intensifying the protests, associations of workers in sectors like construction joined the protest on Marina beach and hordes of volunteer groups pitched in by supplying food, snacks and drinking water to the protesters, a chunk of whom stayed overnight on the sands of the beach.

Government employees held a protest in Ezhilagam Complex opposite the beach and IT employees too continued their protest.

Sporting paper horns, young men and women held creatively worded placards in Tamil and English, asking the state and central governments to immediately pave the way for holding of the sport.

That the crowds on Marina were apolitical became evident with both Prime Minister Narendra Modi and Chief Minister O Panneerselvam becoming targets of protesters, who used comedy tracks from Tamil movies like the "mixture meme" from film 'Nattamai'. Also, animal rights organisation PETA was at the centre of the attack.

Several women held banners saying "no" to talks and seeking the nod for the sport as the way-out to uphold the "Tamil pride and culture".

Traffic came to a virtual standstill on arterial Kamarajar Salai abutting the beach almost throughout the day with the agitators spilling over on to the road.

On the sands of the beach, agitators split into groups, formed circles, shouted slogans, played music, singing songs and held skits in support of Jallikattu.

They ridiculed the meeting of Panneerselvam with Modi as a damp squib and the latter's assurance that steps will be taken as "ritualistic", demanding tangible results.

Protests continued to be held in other parts of the State as well, including Madurai, Salem, Coimbatore, Karur, Tiruchirappalli and Erode, besides neighbouring Puducherry by students of colleges and universities. Rail rokos were held in places, including Salem and Chengelpet.

OPS stays back in New Delhi after unfruitful talks with PM 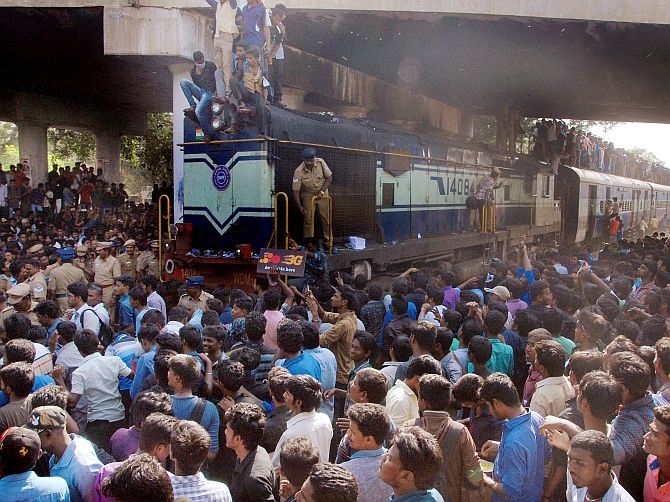 Meanwhile, Chief Minister Panneerselvam cancelled his return to Chennai and held discussions with the state's Additional Advocate General Subramonium Prasad on the issue of how to ensure Jallikattu.

The chief minister is understood to have discussed the option of promulgating an ordinance and sought opinion whether it could be sustained in the face of the Supreme Court being seized of the matter.

According to an official statement, the chief minister extended his stay in the capital and is personally supervising the developments in the state.

He is giving necessary directions to the officials concerned, it said.

Earlier in the day, the chief minister met Prime Minister Narendra Modi and sought promulgation of an ordinance to allow Jallikattu amid wide protests in his state against the ban on the annual bull taming sport.

Prime Minister Modi, however, expressed the government's inability to promulgate an ordinance on the issue.

Modi told the Chief Minister that he fully understood and respected the sentiments of Tamil Nadu people on the Jallikattu issue.

"I am aware of the feelings of the people of Tamil Nadu on the issue," Modi was quoted by the chief minister as having told him.

After the Chief Minister pressed for immediate steps for promulgation of an ordinance, the Prime Minister told him that the Supreme Court was yet to give its verdict on the notification of the government on the issue but the Centre would support any steps taken by the state government on this.

The chief minister said he told the Prime Minister that Jallikattu is a traditional right of Tamil Nadu and a sport symbolising bravery and that it should be allowed. 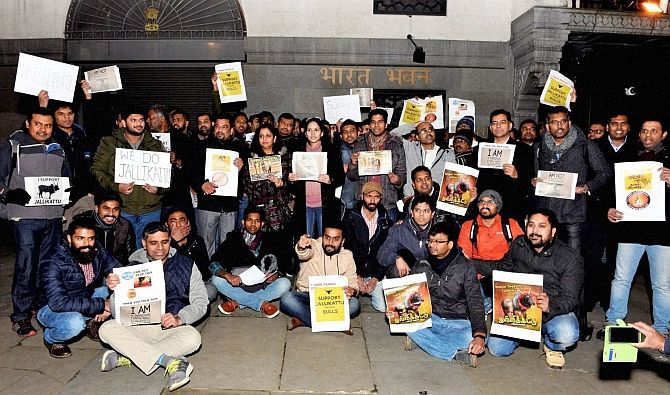 People for the Ethical Treatment of Animals-India said it may take the legal route if the Centre brings an ordinance to enable the conduct of Jallikattu or continue its campaign to create awareness against the holding of the bull-taming sport in Tamil Nadu.

"Our campaign is against cruelty towards all animals. We will consult our lawyers and take a decision if there is an ordinance," PETA spokesperson Manilal Valliyate said.

"There are various other humane conservation methods to protect the indigenous breed. Jallikattu is not the only way," Valliyate said.

"The Tamil Nadu government had initiated many conservation programmes in the 1980s. Though Jallikattu was played during that time, the decline was because of the cross-breeding programme during milk revolution," he said.

"In Jallikattu, the cruelty is inherent and you have to agitate the prey animal to run or react to the threatening situation. There is necessary and unnecessary suffering. Jallikattu is an entertainment and falls under unnecessary suffering. The court has also ruled that if there is a conflict between tradition and law, the law takes precedence. To respect the law and SC judgement, we are supporting the ban," Valliyate said.

'Jallikattu is a cultural symbol' 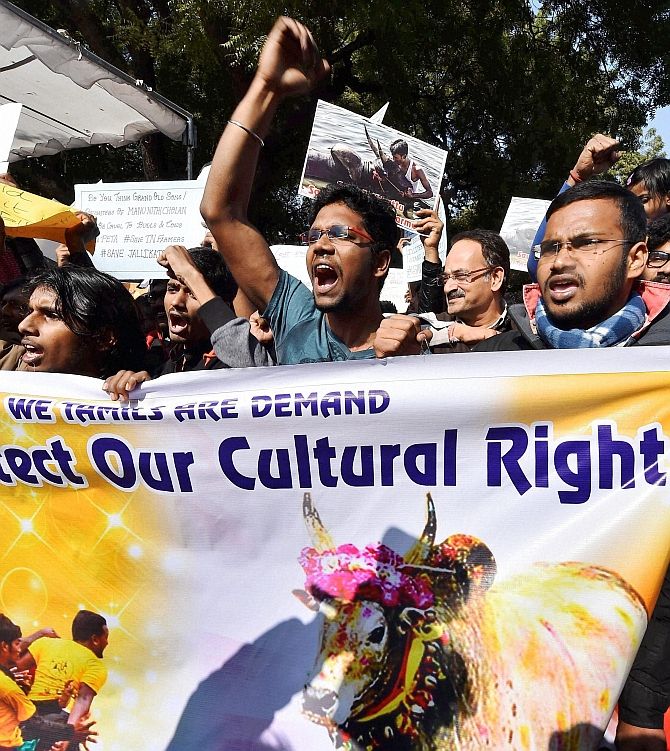 "#jallikattu is a cultural symbol. Respect it. Im all for animal rights but here that is not the point. tradition & livelihood are", the chess legend wrote in his official micro-blogging site Twitter.

"my state rises again. In unison. In peace. Proud to be a #tamizhanda. Genext here are modern yet culturally rooted #JusticeforJallikattu", Anand who hails from Chennai, said.

Spiritual writer and founder of Isha Foundation Jaggi Vasudev Sadhu too supported the sport, saying it has a traditional significance.

The yogi, who was attending the ongoing Jaipur Literature Festival, argued that the centuries-old sport was conducted to honour animals, and not to carry out any cruelty against them.

"The bull is part of a farmer's family as it lives with them. Jallikattu celebrates the farmers' relationship with their livestock," he told reporters.

The writer, who was at the festival to talk about his book 'Inner engineering: A Yogi's Guide to Joy', claimed animal rights activists presented the case in the court without understanding the significance of the festival and citing only a few "bad examples".

"Jallikattu should be seen as a sport. If such festivals do not take place, the livestock will line up at slaughter houses," he said.

Talking about the dangers associated with the sport he said, "Even playing cricket with a leather ball coming at a high speed is no less than a missile and too dangerous for the players.

"If the government wants to stop such festivals, they should open stadiums and grounds for people to play sports," he said. 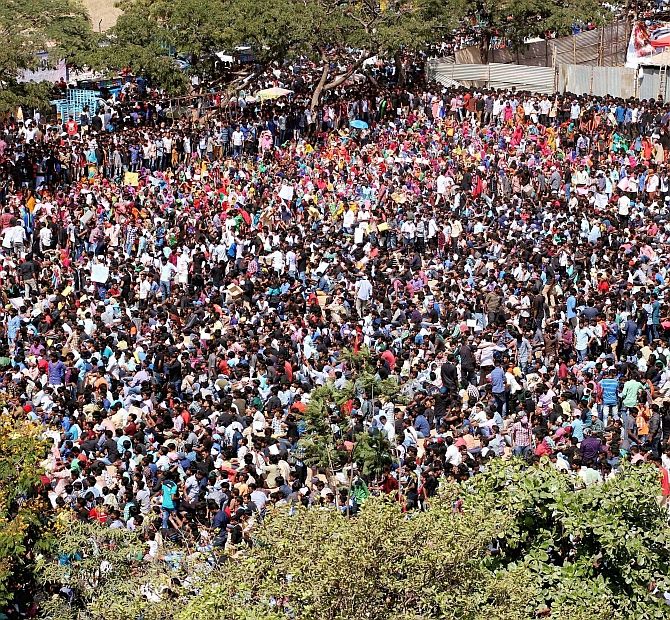 Protests demanding lifting of the ban on Jallikattu have spread to beyond India with the Tamil diaspora in Sri Lanka, Britain and Australia holding demonstrations.

Hundreds of UK-based Indian Tamils have come together to organise a series of protests in favour of Jallikattu this week in London and across the UK. The protest group includes London Tamil Sangam, World Tamil Organisation and British South Indians. They held protests outside the Indian High Commission in London on Tuesday and yesterday. Protests are also planned in the city of Leeds in England and Dublin in Ireland.

Meanwhile, in Sri Lanka, protest was held in the Tamil minority dominated northern capital of Jaffna, on Wednesday. Hundreds of people held placards saying 'Why ban it when it is our culture' and 'This is a valued tradition lets permit it'.

"Jallikattu is an ancient and traditional Tamil sport. The (ancient) seals of the Indus Valley civilisation depict it, which is proof that this sport was in vogue more than five, six thousand years ago -- why ban it now? It is like taking away a part of our lifestyle," a protester Thiru Arumugam was quoted as saying by media reports in Sydney.