Israel's hawkish Prime Minister Benjamin Netanyahu had ordered security forces to prepare for an attack on Iran's nuclear facilities in 2010, but his military chief and top spy refused to follow orders, calling the move "illegal" and akin to "stealing a war".

According to an investigative report by an Israeli channel, the military chief and the top spy of Israel vehemently opposed the move that could have brought the two countries on the verge of war.

At the end of a meeting of the forum of seven senior government ministers in 2010, which the then Chief of Staff Gabi Ashkenazi and former Mossad chief Meir Dagan attended, Netanyahu gave an order to raise the level of preparation of Israel's security apparatus to "P Plus" -- a code that signifies getting ready for a military strike.

The investigation by the Channel 2 programme "Uvda" (Fact), Dagan came out sharply against the attack on Iran telling Netanyahu and Defence Minister Ehud Barak, "You are likely to make an illegal decision to go to war. Only the Cabinet is authorised to decide this."

Meanwhile, associates of Ashkenazi reportedly said that the former Israel Defence Forces (IDF) chief was concerned that raising the alert level would "create new facts on the ground," leading to a war.

Barak in an interview to the channel said that Ashkenazi responded to Netanyahu at the time saying that the IDF was not ready, and that he did not have the operational capacity to carry out the order.

The defence minister claims in the interview that in contrast to Ashkenazi and Dagan's positions, raising the alert level to "P Plus" does not necessarily entail going to war.

"The things that you are describing are the responsibility of the government. The idea that if the (IDF) chief of staff does not recommend something that is possible to do, then we cannot decide to carry it out -- this has no basis in fact," he said.

We may NOT carry out unilateral attack on Iran: Israel 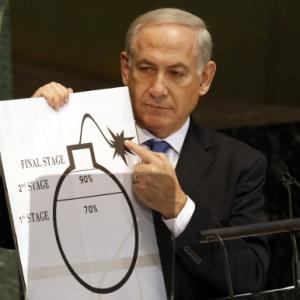