Congress president Rahul Gandhi said in Dubai on Saturday that India has witnessed a great deal of intolerance and anger in the last four and a half years which stemmed from the 'mentality of the people in power'.

Gandhi, who is in the United Arab Emirates on the second day of his maiden visit to the country, said India did not force one idea on the people and can absorb multiple ideas.

"India has shaped ideas and ideas have shaped India. Listening to other people is also an idea of India," he said while interacting with the students at the IMT Dubai University as part of his global outreach programme ahead of the general elections.

He said it was harder to make sports number one priority in India as the country faces bigger challenges like hunger.

"Tolerance is embedded in our culture. But we have seen a lot of anger, division among communities for the last four and a half years. It stems from the mentality of the people in power," he said.

"We don't like an India where journalists are shot, where people are killed for what they say. That is something we want to change, that is the challenge in the upcoming elections," he said.

He said healthcare was a 'huge opportunity' for India in global perspective.

"We are sitting on the biggest genetic resources on the planet and that is what cure and medical health is going to be about in next 10-15 years," the Congress president said.

"Brain Drain' was a 20th century idea. In the 21st century people are more mobile and go where real opportunities are. One should make sure that your country provides opportunities," he said.

Gandhi said India needed to reshape its banking system so that small and medium enterprises can get financial resources in order to scale up to become large companies.

Gandhi on Friday had an 'excellent meeting' with vice president and prime minister of the UAE Sheikh Mohammed bin Rashid Al Maktoum during which the Congress president assured him that he was committed to an even stronger bilateral ties.

Earlier, he addressed Indian workers and interacted with business leaders.

Gandhi also interacted with representatives of the Indian Business and Professional Council (IBPC), Dubai and met the Punjabi community. 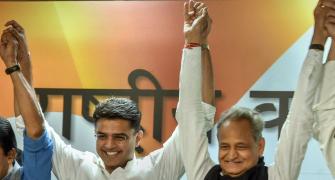