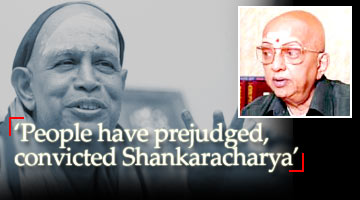 Cho Ramaswamy, editor of the Tamil magazine Thuglaq, is one of the most respected political analysts in Tamil Nadu.

A day after the Kanchi Shankaracharya, Jayendra Saraswati, was arrested, he told rediff.com that the police would not have taken the step unless they had concrete evidence.

Contributing Special Correspondent Shobha Warrier caught up with him recently to discuss fresh developments in the case.

Do you still think the police would not have arrested the seer if they did not have concrete evidence?

Yes, I still feel the police must have had enough evidence to convince themselves and the government that they had a solid case for arresting the seer.

But what is sufficient for an arrest need not necessarily be sufficient to get a conviction in court. The proof required in a court needs to be more convincing than those required for police action. It remains to be seen what happens.

However, I feel that certain actions of the prosecution side are not satisfactory.

For example, the prosecution's statement in the court that the Shankaracharya had made a confession and that they had videographed it.

First of all, any statement made to the police falls under Section 161 of the Criminal Procedure Code. Such a statement is not evidence before the court. It can be used only for the limited purpose of confronting a witness who has turned hostile. It has no other judicial value.

Such a statement cannot be signed by the accused. The section says the police shall not obtain signature from an accused or witness.

Videographing is much more objectionable than obtaining a signature. It remains to be seen whether this will be considered as transgression of law by the police.

They (the police) are also delving into his personal relationships, which have nothing to do with the murder case.

Yes, there are issues about women (being involved with the Shankaracharya) and all that, which are in no way connected with the case. Still, they are being bandied about by the police.

Several newspapers, both English and Tamil dailies, and television channels have been coming out with stories of the so-called videographed confession of the acharya. How could they get it unless the police themselves distributed it selectively to the media?

Then, this woman (a novelist, who has accused the seer of improper behaviour) makes accusations against the Shankaracharya 12 years after some alleged incident and makes derogatory remarks against him. How is it relevant to the murder case? The police seem to have talked to her.

All these make me feel there is an attempt on the part of the police to tarnish his reputation. Otherwise, I don't understand why these kinds of things should happen.

Why do you think the media is crucifying him and branding him a criminal even before the trial has started?

While I still believe that the government would not have proceeded against the Shankaracharya unless they were in possession of solid evidence, I also believe the trial should not take place in Tamil Nadu to ensure that his right to a fair trial is safeguarded.

Do you feel political vindictiveness is behind all that has happened to the Shankaracharya?

The police and the State have a lot of explaining to do with regard to their actions and intentions.

The police had earlier claimed that the two accused, Kathiravan and Rajini, had confessed to the murder. They were touting the confessions as important evidence. But the two have retracted their statements. What will happen now?

Did you approve of the seer's involvement in politics? Many attribute his present predicament to that role.

I don't think this is the right time to discuss it. I had written about it earlier, but this is not the time to reiterate all that.

It seems when George Fernandes met the Shankaracharya in jail, he was told by the seer that the truth will never come out. Do you feel so?

Truth, I think, will come out. After all, the process of law is established for that. For it to proceed on a fair basis, the trial has to be shifted to some other state.

Why do you think DMK president Karunanidhi made an about turn after appreciating Jayalalithaa for arresting the Shankaracharya?

One of the accused, Appu, is considered to be close to some of the DMK bigwigs. There was a case of alleged suicide in Chennai sometime back. There were doubts that it was a murder, and the name of Appu was mentioned along with that of a DMK bigwig. Since the police are getting close to Appu, Karunanidhi might have felt it better to make statements now, rather than comment later after something happened. I do not know. It could be the reason.

Do you feel Karunanidhi may have felt that he and the other Opposition parties were actually helping Jayalalithaa prop up her image with statements appreciating her?

I don't think so. But one thing I am sure of is that those who appreciated her action without any reservation were mostly the United Progressive Alliance supporters in the state. Those who had reservations about it were her supporters! Under these circumstances, I don't think she will gain any electoral advantage.