News
Business
Movies
Sports
Cricket
Get Ahead
Money Tips
Shopping
Sign in  |  Create a Rediffmail account
Rediff.com  » News » 'All my characters are flawed, often terribly so, but I forgive them'

'All my characters are flawed, often terribly so, but I forgive them' 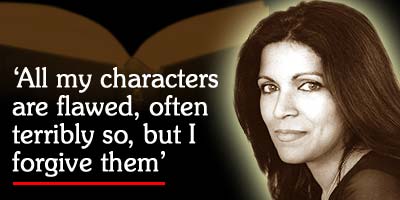 From the time Lakshmi leaves home in Ceylon to Malaya at the beginning of the last century, her life becomes an unending struggle.

Her husband, many years older than her, cannot give her the comfort promised before the wedding. But Lakshmi, 14, will not surrender to gloom and pessimism. As she takes charge of her life and her young children, she tries to create a secure world for them.

Throughout tragedies and betrayals, she remains strong, inspiring and at times terrifying.

Rani Manicka's first novel The Rice Mother is the deeply felt and luminous story of Lakshmi and her world.

'You will be hard-pushed to find a more powerful novel this year,' declared Britain's Glamour magazine. Kirkus Reviews noted, 'Exotic, sensual, often searing, and ultimately universal in its depiction of an Indian family Read this one slowly, to savour.'

The book's paperback edition is available in America from Penguin. Manicka was born and educated in Malaysia.  She spoke to rediff.com Senior Editor Arthur J Pais from her London home recently.

How did your grandmother inspire you to be a writer?

The seed was always her indomitable energy, the way she refused to give up, and the way she could turn her hand to anything she set her mind to do, whether it was sewing, gardening, cooking, or running a profitable business during the Japanese occupation.

A woman who baked cakes without needing weighing scales -- everything done ''by eye.''

What do you admire most in her?

If she lived in my time she would probably be running a Fortune 500 company. Of course, greatness is a double-edged sword and she fell on hers. By the time I knew her she was an old, defeated woman sitting behind the half-open door of her wooden house bitterly watching the world go by. 'She is a toothless tiger now,' my mother said.  Even then I remember looking into my grandmother's eyes trying to figure out what that tiger must have looked like when it had all its teeth.

She was around you (in spirit) when you wrote the novel

In writing The Rice Mother I suppose I was returning her to an exotic yet harsh world where her spirit could roam fierce and wonderful again.

How much of story telling did you have at home?

When my mother used to feed me with food and fairytales at dinner time, but this I imagine happens to all kids, if not at dinner time then at bed time.  My mother had a far more crucial role in the making of The Rice Mother.  People used to say to me, 'Oh, but you must have done so much research.' I used to reply, 'My library was in my mother's head.'

In your mother's head?

Yes. All I had to do was pick up the telephone and say, 'Ma, did you have plastic in the 1930s?' Or whatever it was I wanted to know... She would talk for half an hour.  I would put the phone down and write for two hours.

Tell us about one of the strong themes in your book -- the resiliency of the human spirit.

The resiliency, the ability to bounce back, dust oneself off, and declare, 'Obviously much better than this was meant for me' is an asset that is not fully utilized/recognized. It is the willingness to trust that one's soul keeps knowledge one knows not yet of, and is pushing us along to the next thing that invariably is the better path. But to be very frank it is not a theme I am consciously promoting.

Forgiveness is also an important part of The Rice Mother.

When I think of The Rice Mother I always think of acceptance.  All my characters are flawed, often terribly so, but I forgive them.  Then it is game with me.  How far can I go?  How much will the reader forgive?  Will they forgive Lakshmi for blowing chilli powder into her son's eyes, or Ayah for tricking his young bride, and how despicable can Luke be, or Lakshman, or Rani, or Sevenese. They are all faulty but will you root for them anyway?

Now that you live away from Malaysia, what do you miss most about it?

My parents. I often think there is nothing that will happen to me in the near future that will distress me as much as the

loss of them. My parents are the most special things I have. What more is there to say? What was the reaction of your parents to The Rice Mother?

They saw it as another one of my mad ideas. They might have been a little concerned I was not moving on hastily enough to the next project, which they could hope was going to be something with slightly better prospects than that of being an author.

My parents' generation prayed for their children to become doctors, engineers and lawyers. Failing all that teaching was a good thing for a girl to do. Even to say they were shocked by the reception The Rice Mother received must still be counted as an understatement.

When did you come to England?

I came to England too long ago.  It is home but Malaysia is home too.  That may be why I divide my time in equal parts between the two countries.

What did you do before turning to writing?

I used to be a management trainee, but that was longer than too long ago. Before I began writing books I was in the restaurant trade; a rather awful place where absolutely everyone will try to rip you off.

What kind of a reader are you?

My taste keeps changing. When I was a teenager it was an unremitting diet of romance paperback. Now that I am grown up, and the world is a little more tired and jaded. Mario Puzo, Margaret Atwood, Anita Brookner, Anne Tyler, Martin Amis, and very recently Sarah Hall come to mind.

How do you go about writing novels?

I used to be able to say the writing process is quite easy.  That there was no struggle with words, not yet anyway, only with distractions; the garden, the telephone, the television, the fridge, the pub. I could be trusted to wake up in the morning, crawl downstairs, get a mug of tea and switch on the computer.  Good days meant I walked away having fed the computer 2,000 words and lazy days when I turned away before even reaching 1,000... But that was before I started writing The Last Goddess.

What is the new novel about?

I am looking at the legend of Sohrab and Rustom, and Firdausi, who wrote it. The story as well the writer's life is examined from a feminine point of view.

Was there a dramatic change in schedule when you began writing the book?

For months I did not read papers, listen to the radio, or watch television.  All I did was immerse myself in everything Persian. Then, I swear, I was drunk for one solid month out of pure frustration as I could not get back that feeling I had experienced inside me while I was in Iran researching for the book.  No doubt it makes me sound like the worst kind of drama queen, but I sensed my character while I was there.  More than a thousand years ago this amazing poet was alive, and at his grave, when I called, he came. Weird, really weird. Eventually I think I did find his elusive voice.

What is the ultimate novel you want to write?

There is no ultimate novel.  I am not working towards anything so grand and impressive.  If someone could say my books are entertaining, moving, or better still absorbing, I will be satisfied.

How much of your cultural and religious heritage do you maintain in England?

You know that thing about when in Rome.  When I am in England I do not try to be a Malaysian/Indian. I don't have to try to maintain anything. I am all East inside.  I can marry a foreigner, speak his language and immerse myself in his culture, but what is food and dress? At core, my reflex was always the soil of my childhood.  I remember one of my 'clubbing and going out' friends started reading The Rice Mother and after 50 pages she telephoned me in shock to demand, 'Who are you?  Who the hell are you? I've been going out with you for nine years. I know nothing of this whole other person living inside you.'

Do you consider yourself a Hindu now?

I am a Hindu as my father is a Hindu, but I could as easily and happily have been a Muslim, a Christian, a Buddhist, a Bahai. All religions bow to only one God. Call him by any name, he will answer. It is man in his narrow limited perceptions who makes minute differences and consideration into insurmountable blood feuds.

If there is such a thing like reincarnation, what would be your choice of a profession?

I want to say, 'If there is, then let it be a lovely surprise,' but by its own definition, that would mean another turn on the wheel of suffering, wouldn't it?