'We will listen to Indians abroad' 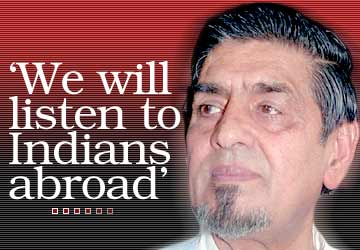 Minister for Overseas Indians Jagdish Tytler has big plans to make the 3rd Pravasi Bharatiya Divas 2005 -- the annual event for Non-Resident Indians and People of Indian Origin -- a huge success.

Prime Minister Manmohan Singh will inaugurate the event in Mumbai on January 7.

Busy with the preparation for the three-day event along with the Federation of Indian Chamber of Commerce and Industry, Tytler spoke to Ehtasham Khan at his South Block office in New Delhi.

What is the objective behind taking this event from New Delhi to Mumbai?

There are two things. Mumbai is a hub of all economic activities in India, and many countries are showing interest in increasing economic relations with us. You know most of the corporate houses are based in Mumbai. Secondly, last time many participants complained that it was very cold in Delhi. January is usually very cold out here. Lots of flights were delayed due to fog.

It is a healthy trend. We should shift it from one city to another. Next time I am planning it in Bangalore. Kerala is also wanting to host it there. It is important because many people from Kerala live abroad. The thrust is on business.

What are the areas in which you think there could be some kind of exchange?

I think the focus areas would be education, information technology, software, infrastructure, science and technology and health. Tourism has become an important industry all over the world and India is increasing tourism by 25 per cent every year. The debates would be basically on these areas.

Last year, there was one session on Bollywood. Since the host city this time is Mumbai, are you planning something in that area again?

I am not very keen on getting too much involved with the film industry. The conferences would be business-oriented. Okay, there would be some part on entertainment. But taking Bollywood as an industry, they are looking after themselves quite well. The Government of India doesn't need to engage with the film industry in any way.

What is the Bharatiya Samman Award 2005?

We are giving this award for the first time this year. It will be presented to an outstanding NRI or PIO by President A P J Abdul Kalam. A committee has been formed and it is yet to decide on the winner. We are getting lots of recommendations.

What kind of people are you looking at [for the award]? Academicians, politicians...

Anybody who has made a contribution towards the Diaspora or literature, science or communal harmony, culture... any contribution that has brought the two countries together [that person's adopted country and India]. The award will be announced by December.

Some critics say the PBD is just a waste of money. People come, there is nostalgia, they enjoy it as a holiday and go back. What has the last two PBDs achieved?

Why critics? I say this. This is true. This is because earlier we didn't have any ministry. People came, spoke and went away. There was no follow-up. But the two PBDs have focussed on the problems. So it was easier for Prime Minister Manmohan Sigh to work on the points that they (the participants) had raised. We looked at their problems and now they are comfortable. Now we will listen to them and follow it up. Now we have a ministry to look into the affairs of Indians abroad.

How is the event in 2005 going to be different?

It is more of a business now. Earlier, there was no one to follow up. That will not be the case now. Earlier if they (the NRIs and PIO) had a problem, they had to run from one ministry to the other. I know of a person who wanted an appointment with an officer for six months. They shouldn't waste time like this. They have come to the country to invest and they should do business. They just need to come to me and I will ensure that their work is done.

In the last conference many businessmen complained they had to run from pillar to post for petty issues. I met one person from the US who wanted to start a five-star hotel somewhere in Andhra Pradesh, but nobody from the state government was there to help him.

How are you going to involve the state governments in situations like this?

But the norms have to be followed. It's not that the overseas Indians come and say give me land I want to build something here. This cannot happen. We have to follow the laws. We will see that they are not harassed.

After taking the charge of this ministry, you announced NRI cities. What is that and what has happened so far?

All overseas Indians, around 22 million, are looking at their roots. They enjoyed their lives, made money and became successful. But when it comes to cultural links, they try to look at their forefathers. They want to build homes in India and stay there or to shift here permanently after retirement. Then, they start looking for a place in India and it becomes very difficult for them.

So the concept of a city within a city was introduced. Every main city will have an NRI city especially for overseas Indians. We have identified some 22 cities and private companies have selected some 122 cities in India to build NRI cities. It (each city) will be a complete township with all kinds of facilities. Houses are being built there. There will be a presentation on this at the PBD 2005. People can buy houses here. The homes will be looked after by the companies. Maintenance will be done, house tax will be paid in time and all sorts of care will be taken by the company. Appropriate security will be provided.

Today, what is happening is that many NRIs and PIO are cheated when they buy homes here. Somebody forges their signature, somebody opens the lock and occupies the house... all kinds of problems are there. The owners living abroad keep thinking about their homes in India. But under this NRI city scheme, they will not have such problems. We will take care of it.

Which cities have you identified?

To begin with, Kerala and Maharashtra. In the second phase, Punjab, Andhra Pradesh and Karnataka. All the states in the country will have it phase-wise.

When is it going to start?

In January, at the Pravasi Bharatiya Divas event.

Are you going to make any presentation on that at the PBD?

The private companies will. Omaxe, Ansals, Sahara and many others are doing it. The government is not involved in making and selling homes. We have encouraged private companies to come and we will make sure that NRI cities come up. We will keep a watch and see to it that nobody is duped.

You have been travelling all over the world ever since you joined this ministry. What have you achieved?

The mere fact that last time we had just 260 registrations and this time we have already crossed the 400 mark by now for the event (is an achievement). This shows my road shows have been successful. I got a wonderful response wherever I went. So much of enthusiasm... the feeling is that there is someone to represent them in Parliament.

Which countries have you covered?

Brussels, France, Spain, Portugal, Germany, Singapore, Malaysia, Thailand, Australia, New Zealand, Fiji, and Dubai. I am now going to South Africa, Kenya and Kuwait. My secretary has already gone to England, Canada and America. My joint secretary is in South America. So we have covered the world.

There are reports that your ministry is not well established and you don't have bureaucrats to run the ministry.

Whoever is saying (such things) is speaking nonsense. It is a creation of you and your (journalist)] friends.