News
Business
Movies
Sports
Cricket
Get Ahead
Money Tips
Shopping
Sign in  |  Create a Rediffmail account
Rediff.com  » News » 'Is it wrong to be proactive?'

'Is it wrong to be proactive?' 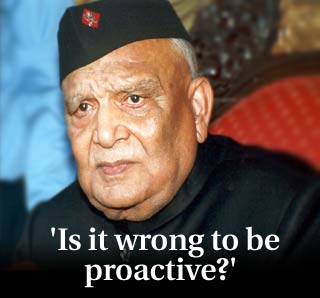 Retired Lieutenant General Srinivas Kumar Sinha, who took over as the new governor of Jammu and Kashmir on June 4, has had an eventful stint for nearly six years as the governor of Assam.

One of most proactive governors that Assam has seen in recent times, Sinha unlike several of his counterparts, was not content to live in the silent shadows of the stately Raj Bhawan. From the moment he joined as governor in September 1997, Sinha had been in the thick of one controversy or the other, be it the denial of sanction to prosecute the then Chief Minister Prafulla Kumar Mahanta in an alleged corruption case, or the debatable report on the influx of Bangladeshis that he sent to the then Indian President KR Narayanan.

As he was preparing to leave for Srinagar after returning from a fortnight-long holiday in Europe and the United States, Sinha found time to speak to G Vinayak.

The most obvious question. What has been your most satisfying moment during your stay in Assam?

In fact, I can think of two satisfying moments. When I took over in September 1997, the Indian Army, which I had served for 40 years, was looked upon by the people of Assam as an 'occupantional' force. There was very little interaction between the troops and the local populace. I set about correcting that perception and I am proud to say that today, through a series of measures, the Indian Army is regarded as a people-friendly force, helping people not only to combat insurgency but also to better their lives.

I remember within a month of coming here there was a case of the rape of a local women by troops of one of the units deployed in the Nalbari district. I immediately called the general in-charge and sought quick, exemplary punishment through an open court martial. The general's wife visited the victims and offered solace. The guilty soldiers were not only dismissed from service but were also given 10 years of rigorous imprisonment. The people appreciated this quick justice.

Slowly, the army also started a series of welfare measures under its civic action programme. The force repaired or rebuilt several schools, temples, primary health centres and roads in the interior areas. This convinced the people that the army is a force with humane qualities. This was my first satisfying moment.

But the second development was more fulfilling. Through a concerted effort, we managed to make the people of Assam rise against militancy. There has been such a turnaround today that villagers no longer give shelter or food to militants. Indeed, at least 30-odd militants have been killed by villagers themselves and another 60-70 have been caught by unarmed people and handed over to the security forces over the last three years.

I think, this is the biggest breakthrough we have had in our fight against militancy.

So is insurgency nearing its end in Assam?

It certainly has lost its ideological moorings. Now it's just a means to loot and plunder. In any case, having lost people's support, these misguided youth cannot sustain themselves for too long.

Is Assam then poised for greater development and economic progress?

It certainly is. Look at the changes in big cities and rural areas throughout the state. Guwahati is today one of the fastest growing cities in the country. Agriculture has taken a great leap forward thanks to the scheme that we had launched through NABARD [National Bank for Agriculture and Rural Development] for sinking one lakh shallow tube wells across rural Assam. I am very positive about Assam's future.

Through your stay here, you have been charged with being a "proactive" governor.

Yes, I am aware of that perception. But is it wrong to be proactive? I cannot and did not interfere in the administration. All I did was to offer suggestions and through my contacts both in the army and the central government, I tried to get as much help for Assam as possible. If this is a sin, I am certainly guilty!!

Your report on the influx from Bangladesh also created a controversy in the state?

I am aware of that but look, all I did was to highlight the problem that has great demographic and security implications for the country. I have been accused of being pro-Hindutva and all but let me say this, when I submitted this report in November 1998, the BJP was not in power. I K Gujral was the prime minister then. Moreover, I have not distinguished between a Muslim infiltrator and Hindu infiltrator. I have clearly said that whoever -- a Hindu or a Muslim -- comes in illegally must be deported. What is wrong in saying this?

A lot of motives were also attributed to you for not allowing the Central Bureau of Investigation to prosecute the then Chief Minister Prafulla Kumar Mahanta in a corruption case.

What motive could I have had? I did not know him from before. All I did was to go by the available evidence. Since I did not find prima facie evidence against Mahanta, I refused to give sanction. It was as simple as that.

Do you look at your shift to J&K as a "promotion"?

At my age (Sinha is 77), I am not looking for a job! All my four children are well settled and I don't need to work for a living but yes, I have always responded to the call of duty. I did not seek the assignment in Kashmir but once I was asked to go there, I did not refuse.

You are also a great believer in "a unified" command concept for tackling insurgency. Will you apply the same method in J&K?

Kashmir, as you know is a much more complex problem than Assam. It has international ramifications; the insurgency there is backed by Pakistan. So the dimensions of the problem are different but yes I would apply the same principles as I did in Assam to win the people's confidence.

You will be remembered in Assam for getting due recognition to two of its illustrious sons --Gopinath Bordoloi [Assam's first chief minister] and Lachit Barphukan [a brilliant warrior who defeated the Mughals in the battle of Saraighat].

Indeed, I derived great satisfaction from the fact that I was instrumental in my small way in getting late Gopinath Bordoloi and Lachit Barphukan their rightful place in India's history. The late Bordoloi who saved Assam from being appended to present day Bangladesh deserved the credit and that's why I lobbied for a Bharat Ratna for him. Thankfully, both I K Gujral and Vajpayee agreed to the proposal and he was conferred the highest award more than half a century after his death.

As for Lachit Barphukan, he was one of the greatest military heroes at par with Shivaji but was unknown outside Assam. By instituting a medal in his name for the best cadet at the NDA (National Defence Academy, Khadakvasla), we could make him a national hero. I am glad I could be instrumental in this.

Finally, do you have any regrets?

Frankly, no, except that I would have loved to complete some of the schemes I have managed to initiate. Otherwise I must say this: The people of Assam have given me immense love and support right from the day I first came here as a 18-year old in 1944, and I am grateful to them for that.