News
Business
Movies
Sports
Cricket
Get Ahead
Money Tips
Shopping
Sign in  |  Create a Rediffmail account
Rediff.com  » News » 'Nobody can deny Sukh Ram is a factor'

'Nobody can deny Sukh Ram is a factor' Himachal Pradesh Chief Minister Prem Kumar Dhumal is confident his Bharatiya Janata Party will return to power in next fortnight's assembly election. "We have done tremendous development work in Himachal Pradesh in the last five years," he told Chief Correspondent Onkar Singh in an exclusive interview in Shimla.

Dhumal has come under attack from Punjab Chief Minister Captain Amarinder Singh, a Congressman, who alleges that
his Himachali counterpart has indulged in corruption. He has now filed a defamation suit against Captain Singh and plans to introduce a bill to curb such allegations if he wins the election.

You have announced the formation of new districts in the state after the election. Is it feasible and necessary?

Of course, this is feasible. That is why we announced the formation of new districts once the BJP returns to
power. Our attempt is to reach out to the people. Keeping in view the needs of the people and to make the administration more effective it is necessary to set up new districts. People need not travel long distances to get their problems solved.

A few months ago you made Dharmshala the state's second capital. Was it necessary?

Dharmshala has a unique location. It is central to Chamba, Kangra, Hamirpur, Unna, Mandi, Bilaspur and Kullu.
During winter it becomes difficult for poor people to come to Shimla and get their problems redressed. In our bid to provide services to them at their door step we decided the government should function from Dharmshala in winter.

Won't you incur more expenditure in moving your government  from one place to another?

We are not transferring the entire capital from Shimla to Dharmshala. Only important functionaries will go on tour. We can have our cabinet meetings in Dharmshala in winter. We could discuss so many things through the Internet. If necessary we can resort to videoconferencing to arrive at quick decisions. We would save a lot of money as well.

Captain Amarinder Singh has leveled allegations of corruption against you.

By making those baseless, trivial charges he has not only hurt me, he has hurt the sentiments of self-respecting Himachalis. We feel a grave insult has been heaped on the people of Himachal Pradesh by the feudalistic chief minister
of Punjab who is unnecessarily meddling in the affairs of Himachal Pradesh. He has made wild allegations. He has no moral right to do so. I have taken him to court for making those allegations. He will pay for it.

He says you have gone to court to prevent further damage to your reputation. Once the election is over, you will withdraw the case.

There is no question of withdrawing the case. My reputation does not depend upon allegations made by Captain
Amarinder Singh. I have been in public life for 30 years. The people of Himachal Pradesh know me. I had declared my assets on April 5, 1998 after I took over as chief minister. This is lying with the speaker of the state assembly. I have distributed a list of my properties to the media as well.

Amarinder Singh is trying to please the Congress high command. The people of Himachal Pradesh will give him a fitting reply. They will give their verdict on February 26 and tell him that the days of fedual lords are over. This is democracy and we believe in it.

You have said Himachal Pradesh will introduce anti-conversion legislation. Will it be on the lines of the law adopted in Tamil Nadu or the one Narendra Modi is contemplating in Gujarat?

It has become necessary to bring this bill because we have been getting reports that some forcible conversions are taking place in the state. We will study the law in Tamil Nadu and other states and then have an anti-conversion bill of our own. We want to nip in the bud efforts to convert people by force or by luring them.

Will your party return to power?

The BJP will return to power with a thumping majority. We will get more than a two thirds majority. The Congress is indirectly helping us by resorting to falsehood and malicious propaganda against the state administration, particularly my family.

Is Himachal Vikas Congress leader Sukh Ram a factor in this election?

Nobody can deny that Sukh Ram is a factor in the assembly election. But no one will be allowed to stand in the way of the BJP wave.

What would be your immediate goals if you return to power?

My immediate goal would be to provide more and more relief to the people of Himachal Pradesh, provide employment to unemployed youth and make Himachal a prosperous state. We would also make sure there is no scope for character assassination. In the budget session we will pass a bill that would make it mandatory for every MLA to declare his assets within three months of getting elected. These declarations would be available with the speaker. Anyone could go to the Lok Ayukta if someone has filed a false declaration. 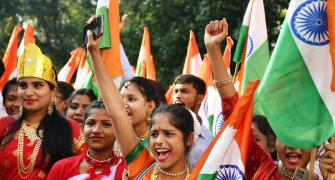 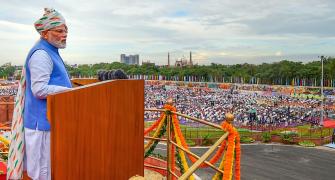