India's own Moon Impact Probe on board the country's maiden unmanned lunar craft  Chandrayaan-I had also detected evidence of water on the moon in a finding confirmed by US space agency NASA which too had an instrument onboard Chandrayaan-I.

The NASA meanwhile thanked ISRO for enabling the discovery of water on moon through Chandrayaan-I.

"We want to thank ISRO for making the discovery possible moon till now was thought to be a very dry surface with lot of rocks," NASA director Jim Green told reporters in Washington.

In Bangalore, a beaming Indian Space Research Organisation Chief G Madhavan Nair said the MIP while descending from Chandrayaan-I to the moon surface about a fortnight after it was launched in October picked up strong signals of water particles. Nair's remark has triggered speculation whether an Indian space mission was the first to discover water on moon.

"Our Chandrayaan I has confirmed the presence of water molecules on the moon," he said.

Apart from India's MIP, the M3 of NASA on board Chandrayaan-I also confirmed the presence of water, he said. The "quantity found is much larger than what was expected which is a real finding", he added.

The scientists, he said, significantly had indications of the finding "way back in June" but waited all these days to make it public as they wanted the findings of such a global significance to come out in a scientific journal first.

"This surprising finding (water on moon) has come about through the ingenuity, perseverance and international cooperation between NASA and ISRO," Green said.

"We have found signature on surface of water not in the form of sea, lake or even a poodle or even a drop you cannot pick it up just like that. It is embedded in surface in mineral and rock and we have clear indication OH and H20 are there on surface may be least for a few millimetre. The quantity was much larger than what was expected, this is the real finding", he said.

According to Goswami, whether there was water down below, the data got from the instruments were still being analysed.

"We have to wait for a while", he said. "Once we have solid results, we will talk to you at the point", he said.

"This is the first time in space research that (presence of) water is confirmed," he said, adding "we have contributed to significant discovery of water on the moon through the Chandrayaan."

Terming it "path breaking discovery" he said, it has "shattered the thought that the moon was bone dry."

Source: PTI© Copyright 2021 PTI. All rights reserved. Republication or redistribution of PTI content, including by framing or similar means, is expressly prohibited without the prior written consent.
Related News: NASA, Moon Impact Probe, Indian Space Research Organisation, ISRO Principal Scientist, Madhavan Nair
SHARE THIS STORY
Print this article
India should be proud of Chandrayaan: ISRO
Kudos to the 2 scientists who made India proud 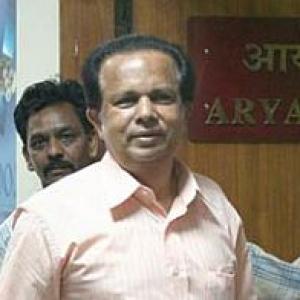