News
Business
Movies
Sports
Cricket
Get Ahead
Money Tips
Shopping
Sign in  |  Create a Rediffmail account
Rediff.com  » News » India's defence secrets are out in the open

India's defence secrets are out in the open

A report of the Citizen Lab at the Munk Centre of University of Toronto, Canada, has claimed that there's 'a vast shadow network of online espionage in China, largely in Chonging and Chongdu' that has stolen classified documents and 'sensitive Indian military information, including details of the Pechora missile system, an anti-aircraft, surface-to-air missile system.'

The 50-page Shadows in the Cloud: An Investigation into Cyber Espionage 2.0 report, on released April 6, claimed 780 sensitive documents had been stolen from India. It said the Chinese hackers had also stolen sensitive documents from 16 other countries and all E-mails from Tibetan spiritual leader the Dalai Lama's office in Dharamsala.

The report claims the hackers have also stolen information about India's Iron Dome missile system; Project Shakti, an artillery combat system; documents related to military training schools and information on movement of troops. 'Computers at Indian corporations, including Tata, had also been compromised,' it said.

Greg Walton, an expert on India who has conducted field research in the country for the investigation, said: "I thought, 'Wow, that's the whole Indian defence establishment." They suggest a shift is occurring from criminal and industrial espionage in cyberspace to a possibility of political espionage.'

Professor Ron Diebert, director, Citizen Lab, and the principal author of the report, has been quoted as saying that they informed the Indian government of their discoveries before releasing the report and the officials were 'taken aback'.

A senior Indian diplomat in Ottawa told rediff.com, "The authorities in India have been aware of this investigation, as these people (Canadian scholars and investigators) have been in contact with the concerned organisations. Our government officials have been reluctant to discuss the matter publicly, as you don't even know if they have infiltrated. Infiltration is a different ball game."

Diebert said, "Computers connected to many Indian defence and intelligence security establishments, some Indian embassies and other organisations were certainly infiltrated and infiltrated to the point that documents were stolen."

The Indian diplomat said he didn't know which Indian officials Diebert had met and how they had had been in touch. Diebert told rediff.com that though he didn't go to Dharamsala, his team members spent weeks there working with the Dalai Lama's personal staff.

Diebert called this cyber espionage network a 'new form of arms race, one that is cheaper than the other methods of espionage, such as satellite networks.' There's a problem of 'collateral damage, since any country dealing with the embassies in India was exposed to the cyber espionage,' he said.

The report says Indian embassies in Kabul, Moscow, Dubai, and Nigeria were deemed to have been compromised. 'Personal data on visa applications for citizens from Afghanistan, Australia, China, Croatia, the United Kingdom, etc were also found'. 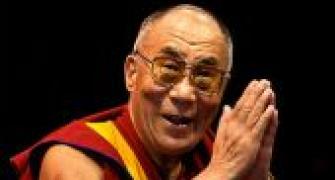