A delegation of Indian lawmakers have asked United States Secretary of State Hillary Clinton to press Pakistan to bring Mumbai terror attack accused like Hafiz Saeed and Zakiur Rehman Lakhvi to book and ensure that Islamabad does not divert US aid for anti-India activities.

The visiting Parliamentarians also raised these issues during a series of meetings with Congressmen, policy makers and officials of the Barack Obama administration.

"We expressed our very strong concerns about dispensable assets like Hafiz Saeed and Zaki-ur-Rehman Lakhvi in Pakistan," Singhvi said soon after his meeting with Clinton.

The delegation, Singhvi said, also raised a number of concerns about how China helping Pakistan's nuclear programme might be in contravention of guidelines of the Nuclear Suppliers Group.

They also urged the US to ensure that Pakistan does not allow its soil to be used for anti-India activities.

"We also expressed our serious concerns about misusing US aid by Pakistan and diverting it for anti-India activities, and how much micro-scrutiny can be done by the US to ensure that legitimate aid does not get diverted for anti-India purposes," said the Congress leader.

Singhvi is leading a group of all-party MPs to attend the fourth India-Yale Parliamentary Leadership Programme organised annually by the Yale University and the Federation of Indian Chambers of Commerce and Industry.

He said the response of American officials to India's concerns has been "understanding, sympathetic, and absorbent".

"They appreciated each of the concerns of India in a detailed manner. All I can say is that they are extremely alive to it and I think -- we can expect without any timelines, guarantees and assurances -- very positive action aligned with India's concerns on each of these issues," he told reporters.

When asked about American concerns, if any, Singhvi said the US' concerns are mainly centered around a larger security architecture for the whole of South Asia.

"I think this is an important achievement that there is no hyphenation of India-Pak relations for the US. The hyphen if at all has shifted further westwards between Pakistan and Afghanistan. That is a positive sign," he said. 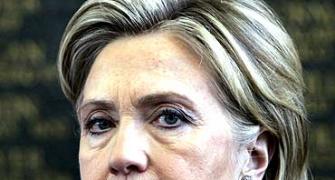 Some Pak officials know where Laden is: Clinton US downplays Clinton's threat to Pak