Retired Pakistani Brigadier General Feroz Khan, currently a lecturer in the department of national security affairs at the Naval Postgraduate School in Monterey, California, and author of Eating Grass: The Making of the Pakistani Bomb, has asserted that "No other country has contributed to Pakistan's nuclear program than India."

His book launch event was co-sponsored by the Woodrow Wilson Center's Asia Program and the Los Alamos National Laboratory, and attended by scores of senior Obama administration officials from the State Department, Pentagon, and intelligence agencies, in addition to representatives of the country's nuclear establishment and leading think tanks.

Khan, a 30-year professional in the Pakistani army who played a senior role formulating and advocating Pakistan's security policy on nuclear and conventional arms control, said, even though Pakistan's military leader at the time, Field Marshal Ayub Khan, was opposed to Pakistan going nuclear, ironically civilian leaders led by Zulfikar Ali Bhutto and the Pakistan Foreign Office had pointed to India's program and pushed for the country taking the same path.

"When they looked at India, the (nuclear) enthusiasts said, 'They are converting this peaceful program and we are watching what is going on. So let's do it now.'"

Khan said, when Pakistan started its nuclear weapons program, "the country was dismembered. Half of the country had gone -- half of the technicians gone, scientists gone, population gone -- that was Bangladesh."

"So now you are dealing with the people who are left after that when the program was started by Zulfikar Ali Bhutto, (but) again, it (the nuclear weapons) program was going nowhere, until India conducted the 1974 test."

Khan said that the 1974 test by India, which it claimed was a peaceful nuclear explosion, "changed any intentions (by Pakistan) into a full-fledged motivated program and there was no turning back. In many ways, it was that event the shaped the nonproliferation regime as we know now."

"And, in many ways," he added, "the US Nonproliferation Act that evolved by the late 1970s was also evolved as a result of the reaction to what happened in South Asia -- after India's test and how Pakistan responded and how the US tried its level best at first to dissuade Pakistan," from going nuclear.

Khan said, "Pakistan was probably the first country that thought of converting the highly enriched uranium technology purely for the purpose of nuclear weapons."

At the outset, Khan said that the idea for the book grew out of the notion that the story of Pakistan's nuclear weapons program was now known and the plethora of books written on the subject were coloured by the A Q Khan controversy, where the father of Pakistan's nuclear bomb, had run a veritable illicit and illegal proliferation black market and transferred nuclear technology and know-how to North Korea and Iran.

He said that at the time, "The Pakistan government was eager that their story should also come out and I, along with my colleague Peter Lavoy (now the principal assistant secretary of defence in the Obama administration for Asia and the Pacific), who was also part of the Naval Post Graduate School back then -- we were both co-authors -- we approached the Pakistani government and asked that unless your whole holistic account of the Pakistan nuclear program comes out, it will only be viewed with one lens alone -- and that is the A Q Khan proliferation network."

Thus, Khan contended, "The book is different, because it gives you an insight into the program from a different lens."

Khan said, in Pakistan at the time there were the nuclear enthusiasts and the nuclear cautionists and "pretty much the debate was on similar lines," as was in Israel.

He recalled that while ironically the nuclear cautionists led by Ayub Khan, the military leader, the enthusiasts led by Bhutto had argued that if Pakistan did not convert into a nuclear weapons program, if the nonproliferation regime comes into place, the availability of technology, which Pakistan was receiving from the US couple with expertise, would no longer be there.

Khan said, "They lost faith in the alliance with the United States as a result of the 1965 war and in fact, the decision of the 1965 war was indeed the very turning point in Pakistan because that contributed to this cautionist and enthusiast debate at the same time, because everything was going well for Pakistan until they decided to do the 1965 war and then things started falling apart from there onwards to date."

Besides, India's nuclear test in 1974, the erstwhile nuclear establishment insider said that another major driving force behind Pakistan's nuclear program was "a fundamental belief that the world will stop us no matter what and they would stop us because we are Muslims."

"The obstacles that were placed by the nonproliferation regime was against this country primarily because it was a Muslim country," he argued and said this fundamental belief continues to drive the program even today.

Khan also asserted that it was a myth that the Pakistani nuclear program "is purely a stolen program -- that this is purely illegitimate, stolen and they could not have done it."

Khan also said the sanctions imposed by the US in the 1970s and again in the 1990s because of Pakistan's clandestine nuclear weapons program and illegal enrichment of uranium had not worked although it had had opportunity costs where Pakistani scientists and students were barred from coming to western universities, etc.

"But the manner in which the sanctions and the geopolitics evolved in the case of Pakistan is more peculiar than can probably be applied to other countries," he said. "In this case, the more the sanctions were applied, the more the resolve grew. So, if we got to eat grass, we are going to do it."

Khan reiterated that "an important fact, which is in Pakistan's case, and I can't say whether this will be the case with Iran or North Korea, was that it was a geopolitically and strategically important country. So, it found a way out to find a means to get out of the sanctions and geopolitical shifts helped Pakistan to do so."

Thus, he said, "The sanctions of the 1970s turned on its head when it became a secondary issue after the Soviet invasion of Afghanistan."

"So, geopolitically important countries find a way out to overcome the sanctions, and that's the story of Pakistan," Khan said. "It's simple as that."

Robert Hathaway, the director of the Asia Program at the Wilson Center and a noted scholar on South Asian studies and a China specialist, who moderated the discussion, told Rediff.com that "this is an important book. Indeed, it is a path-breaking book that is essential reading for anyone remotely interested in South Asian security issues."

But he acknowledged that "not everyone will agree with all of Feroz's judgments. I believe, for instance, that he is wrong in believing that the United States opposed Islamabad's nuclear ambitions with particular intensity because Pakistan is a Muslim country. Nothing in my many years of personal involvement on this issue would bear out this judgment."

However, Hathaway reiterated, "This is a balanced, thoughtful, insightful book. Despite Feroz's 30-year career in the Pakistan army, this is not a book that meekly reflects the views of the military establishment. Indeed, one of the volume's many virtues is that Feroz details the human costs to everyday Pakistanis of their country's relentless drive for a nuclear bomb."

"Is South Asia more secure because of nuclear weapons -- India's as well as Pakistan's? Perhaps that's not even the right question. Nuclear weapons are here to stay -- there's no way around it. So maybe what we should be asking is how we -- Pakistanis, Indians, Americans, everyone -- can collectively ensure that these fearsome weapons are never used." 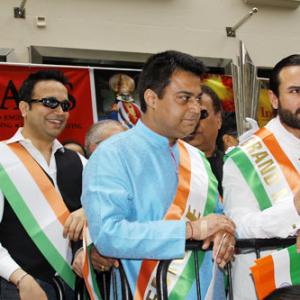