India has asked Morocco to extradite the estranged wife of David Coleman Headley, the alleged mastermind of November 2008 Mumbai terror attack, as she is believed to have information and answers to key questions related to the incident.

If she cooperates, Indian authorities hope that Faiza Outalha will offer information about Hafiz Mohammad Saeed, the founder of terror outfit Lashkar-e-Tayiba and another mastermind of the Mumbai terror attack, a Chicago television channel reported on Tuesday.

In an interview to Chicago's WLS-TV/DT, Headley's second wife Faiza Outalha, who had visited India twice along with her husband during which he surveyed the sites of possible terrorist attack, said that she told the US authorities about the possibility of such an attack, but she was not taken seriously.

"So I went to them and I then started saying stuff, I said he's going to bomb everything, he's a criminal. They didn't bother," Outalha told the news channel.

Outalha alleged she was betrayed by Headley who is now awaiting sentencing in a Chicago prison. He has pleaded guilty to his role in the Mumbai terrorist attacks.

"It was love at first sight, you know, and we just married and, you know, it was so quick. He betrayed me in every way, many lies, he's been lying to me, I mean the marriage, he fooled me to this marriage," Outalha told the channel. 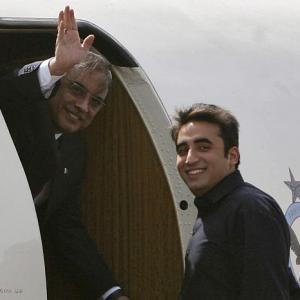 What did Bilawal and Rahul discuss over lunch?