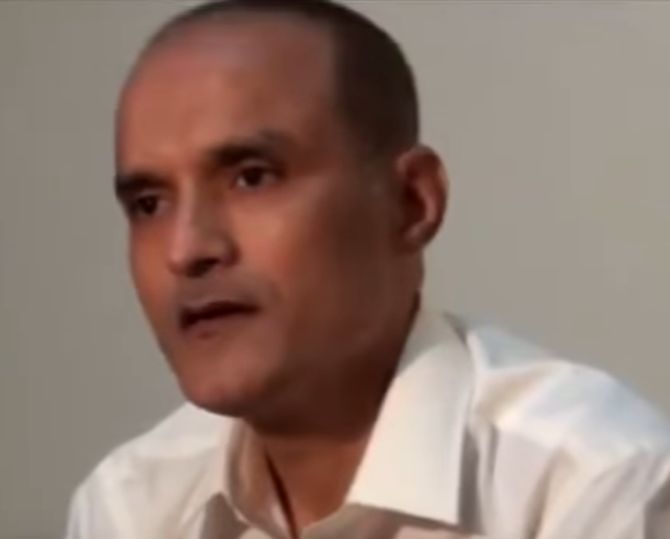 India on Wednesday handed over to Pakistan an appeal by the mother of retired Indian Navy officer Kulbhushan Jadhav, sentenced to death by a military court, to the appellate court, initiating a process to get his conviction overturned.

The appeal on behalf of Jadhav was given to Pakistan's Foreign Secretary Tehmina Janjua by Indian High Commissioner Gautam Bambawale, who also handed over a petition by Jadhav's mother seeking the Pakistan government's intervention for his release and expressing the desire to meet him.

Bambawale, who met Janjua, also made a fresh request for consular access to Jadhav, the external affairs ministry said in press release in New Delhi. This is the 16th request for access.

"Also handed over was an appeal by the mother to the Court of Appeal, on behalf of Jadhav, who continues to be in detention in Pakistan on concocted charges," the ministry said.

In the petition, Jadhav's mother has made a request for the intervention of Federal Government of Pakistan for his release and expressed the desire to meet him, it said.

As per the appeal system in Pakistan, a death row convict has to move an appellate court within 40 days of pronouncement of the verdict.

"Pakistan was also requested to facilitate visas for the mother and father of Jadhav. They wish to travel to Pakistan to meet him and also to personally file the petition and the appeal. They have applied for necessary visa with the Pakistan high commission in New Delhi," the ministry added.

Bambawale asked Janjua to provide access to Jadhav to further pursue his case, including launching an appeal against his death sentence, local media reported.

However, Janjua turned down Bambawale's demand saying "access under (bilateral) agreement is meant for prisoners and not for spies."

Pakistan has denied India's request for consular access to Jadhav over a dozen times in the last one year.

Pakistan Army has already rejected any chance of granting consular access to Jadhav who was sentenced to death for espionage and subversive activities by a military court.

Army spokesman Major General Asif Ghafoor last week said consular access cannot be given to Jadhav because he is a spy.

It was second time that Bambawale has met Janjua to seek consular access to Jadhav.

On April 19, a meeting between Bambawale and Janjua was rescheduled.

On April 14, Bambawale had met with Janjua, showing increasing concern of India about the fate of Jadhav. He told media after his meeting that he had asked for list of charges and authentic copy of verdict of military tribunal against Jadhav to launch appeal against his conviction.

He also said that India was seeking consular access on the basis on international law humanitarian grounds.

Pakistan foreign office has said that during the period of trial of Jadhav, due judicial process was followed and he was provided a lawyer in accordance with relevant laws and the Constitution of Pakistan.

Jadhav was awarded death sentence by the Field General Court Martial earlier this month, evoking a sharp reaction in India which warned Pakistan of consequences and damage to bilateral ties if the "pre-meditated murder" was carried out.

Pakistan claims its security forces had arrested Jadhav from the restive Balochistan province on March 3 last year after he reportedly entered from Iran. It also claimed that he was "a serving officer in the Indian Navy."

The Pakistan Army had also released a "confessional video" of Jadhav after his arrest.

However, India denied Pakistan's contention and maintained that Jadhav was kidnapped by the Pakistan authorities.

India had acknowledged that Jadhav had served with the navy but denied that he has any connection with the government.