India on Tuesday reacted angrily to the resolutions passed by Pakistan's National Assembly and Senate on Jammu and Kashmir, saying they have "no locus standi" on the internal affairs of this country.

The External Affairs Ministry said Pakistan should rather tackle issues of human rights violations, constitutional safeguards, democracy, extremism and terrorism in the part of Jammu and Kashmir under its illegal occupation.

"We have seen reports of resolutions on Jammu and Kashmir that have been passed in the National Assembly and the Senate of Pakistan. We reject these resolutions," External Affairs Ministry spokesman Vishnu Prakash said in a statement.

He said the Pakistani Assembly and Senate "have no locus standi on what is purely an internal affair of India."

The resolutions adopted last night backed the protests in Jammu and Kashmir and condemned the "violence" against Kashmiri people.

Prakash said India is committed to resolving all outstanding issues through dialogue but "crucially, Pakistan must fulfil its stated commitment of not allowing territory under its control to be used for terrorism directed against India in any manner."

India desires good neighbourly relations with Pakistan "in the spirit of true rationality", the spokesman added.

The resolutions called on the world community to take note of the "oppression" of the people of Jammu and Kashmir and urged the United Nations to ensure the implementation of resolutions on Kashmir. 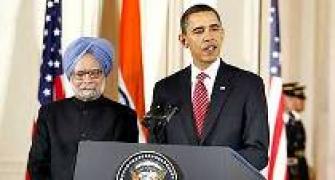 US, India should reduce trade barriers: US Senator
Army officer killed in encounter in Kashmir
What PM told the all-party meeting on Kashmir