News
Business
Movies
Sports
Cricket
Get Ahead
Money Tips
Shopping
Sign in  |  Create a Rediffmail account
Rediff.com  » News » India not in the same league as US and China, says Bharat Karnad

India not in the same league as US and China, says Bharat Karnad

By Aziz Haniffa
December 24, 2009 12:06 IST
Bharat Karnad, considered one of India's leading strategists and a strong proponent of a more vigorous foreign and military policy for several years, has said that India is by no means a major power in the league of the United States or China, and will not acquire great power status unless it becomes a military power.

Karnad, an analyst at the Center for Policy Research in New Delhi, who is currently a visiting fellow at both Princeton and the University of Pennsylvania's Center for the Advanced Study of India, was leading a discussion on 'Obstacles to India's emergence as a great power' hosted by the Brookings Institution. He was particularly dismissive of the recent Legatum Index, which in listing eight variables from Economic Fundamentals to Safety and Security and Entrepreneurship and Innovation to Social Capital, had India coming out ahead of China.

"This is just a kind of feel-good kind of index for India, nothing more," he said, and added, "It just shows a trend path."

Karnad, author of several books on strategy in South Asia, including Nuclear Weapons and Indian Security: The Realist Foundations of Strategy (2005) and India's Nuclear Policy (2008), who lectures regularly at various military and other forums, said, "While it would be ballyhooed in India, this is the kind of thing that gives Indians a poor sense of their destiny."

"Indian government officials, Indian intellectuals, latch on to concepts like smart power, soft power, and the reason is because it doesn't tax them so much," he argued. "This is not a criterion for greatness."

Karnad, who was introduced by Stephen P Cohen, who heads up the South Asia Program at Brookings as "one of India's best scholars and one of the leading strategists and analysts," asserted that "it's hard power that's the basis for power. You don't get it by selling Bollywood movies and musicals."

He said the obstacles to India's emergence as a great power were "self-defeating obstacles," and said particularly when it came to military power, had four major deficits -- having a vision about India, being convinced about India, having a will, and lack of a strategy.

With regard to a question if India does have security, Karnad said, "Seventy percent of its military hardware is imported, and the reason is that the Indian government has still not gotten down to liberalising its defense industry."

"So, the Indian defence industry will not grow," he predicted, and said, "With the Americans coming in selling more weapons," this deficiency of indigenous production would continue to be lacking.

Karnad said except for nuclear weapons, "Without indigenous production of its own weapons, a great power cannot have security," and said, "The armed services of India is remiss in not promoting and assisting the production of indigenous equipment."

He also predicted: "India will have to go and resume testing (nuclear weapons), which it will. It will have to do."

And, he said, there is no way India would sign the Comprehensive Test Ban Treaty, particularly in the current context since "the CTBT is not going anywhere and the NPT (Nuclear Nonproliferation Treaty) is in serious disarray."

Karnad also said, "India is not going to be in front pushing for a nonproliferation regime," for all of Prime Minister Manmohan Singh's declarations to work with President Barack Obama for the elimination of nuclear weapons worldwide.

When he was challenged that if military self-sufficiency is one of the pre-requisites for a great power, how does the US measure up when all of its communications networks and equipment etc are outsourced to countries like Thailand and India, Karnad said, "Mobile telephony -- this kind of communications technology which the US has outsourced out of choice" does not make for military prowess, which is governed by hardcore military hardware.

He acknowledged that in terms of becoming a major economic power, "India is getting there by sheer momentum," but reiterated that "there is no grand strategic plan by the government -- no concerted plan."

Karnad said perhaps India could become a major power, "but not a great power. Only the US and China have that status right now."

Karnad said, "It's being autarchic really," that's key "to be a great power. A great power has a capacity to be an autarchic system. The basic potential to be autarchic basically defines the great power status of a country."

He said that "for the next 15 years, India will be obsessed with the economic issue -- to acquire prosperity and better ourselves before we start looking at the external world," and projecting any kind of hard power."

Karnad said, "There are the makings of a larger security architecture but India is reticent in coming out and saying, we are a major Indian Ocean power -- that it's Indian naval diplomacy that calls the shots in the area."

He said, "The US was first a great military power before they acquired great power status. Look at any great power in the past -- Napoleonic France. So, military power comes first and historical evidence proves that. India has always been doing things from the other side."

"India has been far too restrained a power," he added.

In terms of the systemic external obstacles to India becoming a great power and if a country like India can afford to use military power against a nuclearised state like Pakistan, Karnad said, "If nuclear weapons have made Pakistan feel more secure, that's a wonderful thing."

"Pakistan is integral to India's security," he said. "If there is no Pakistan, we would have had to invent it. We would have been then facing the Islamist threat if there was no Pakistan, which is now facing this existential threat. So, I always argue that we need to do everything to strengthen the sense of Pakistan's security."

Karnad implied that if not for Pakistan, India could very well have been facing this existential threat from Islamists.

Thus, he argued that resolving the Kashmir issue was imperative for India, if only to strengthen Pakistan's security. In turn, without the albatross of Pakistan hanging around its neck, India would have the chance to acquire great power status.

Karnad said he had advocated that India "unilaterally remove all medium range missiles from the Pakistani border. I call them SCBMs -- security confidence building measures. I have been pushing the Indian government to do it."

"But we have a great flaw in not doing the right thing at the right time. We are remiss. Our security is not going to be compromised one bit if we unilaterally demilitarise the border. What can Pakistan do? Nothing," he said.

Karnad lamented that "both India and Pakistan's armies are turned inward -- seeing each other as a threat. There is mutual navel-gazing, when India should be turning outward."

He also warned, "Ultimately if this nuclear threat does emanate and the Islamists do acquire Pakistan's nuclear weapons arsenal, we'll have to work together." 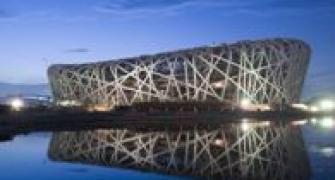 5 reasons behind the rise of China
Impressions: An Indian in China 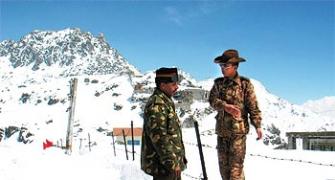 Why India is Clueless about China

Straws in the wind from China