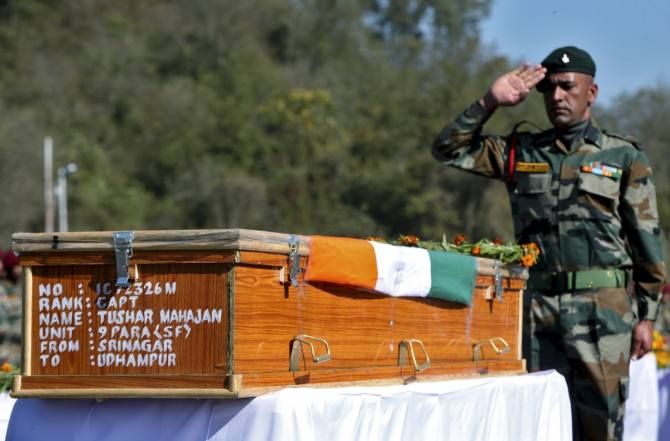 IMAGE: An Indian Army officer salutes the coffin containing the body of Tushar Mahajan, an army officer who was killed in a gunbattle, in Udhampur, north of Jammu. Photograph: Mukesh Gupta/Reuters

'Indian Army has a tradition of valour, bravery and moral values'

I remember an incident which was narrated by a navy personnel to me. A navy ship on a routine visit had gone to one of the small ports in Italy, where it parked along the dockside and the officers and the navy personnel came down to visit the port and meet the officials there.

They were surprised to see a crowd of more than 1,000 people waiting for their welcome. Now, this is a foreign country where the Indian navy had never gone earlier.

They were shocked to see the local MP, MLA, the mayor, everyone waiting for their welcome and then inviting them for their felicitation in the evening for their honour.

The Indian Navy people were quite taken aback. They did not understand the logic of this celebration. So, the commanding officer asked the mayor about the reception given to the Indian Navy personnel. Then the real reason came out...

During World War II, when the Allied forces were occupying defeated Italy most of the (Allied) forces had gone berserk. They were looting (the town); the people, the ladies were not safe.

It was an Indian Army battalion which ensured that not a single house was looted in this particular town by guarding the houses of the people.

The Indian soldiers said Italy was defeated, Mussolini is defeated, but the people (of Italy) have nothing to do with it (should not suffer because of the defeat). People's safety was given paramount importance...

In the ethos of the Indian Army we do not loot, we do not rape, we do not go berserk against the enemy population.

This act (of the Indian Army) was remembered by this town and so they wanted to celebrate the occasion of the Indian Navy's visit to their port town after almost 70 years. These are the ethos of the Indian armed forces.

127 crore people of this country and the Indian armed forces deserve the credit of the surgical strikes.

Mine and your contribution is 1/127 crore in this surgical strike. So, I think with this (statement) the media at least should be clear where the credit lies.

I don't take it. Entirely given the credit to the Indian armed forces and 127 crore people of this country and as a citizen, one by one-twenty-seventh of a crore is my contribution.

'A country which does not make itself capable of waging a war, suffers a war'

Unluckily, over the last 70 years, leave some bright sparks like the 65', 71' and 99', the country has never thought that strength itself can be a defining force for peace.

I always cite a Sanskrit saying which in short means that when there is a yagna (religious ritual) no one sacrifices a lion; it is the goat who is sacrificed. So, weakness is a basic concept of war and the difference between war and peace.

India needs to basically think in terms of strength so that we can avoid war. Otherwise, we have to continuously hear the rhetoric of the use of tactical nuclear weapons.

So, a country which does not make itself capable of waging a war basically suffers the very thing it does not want, that is awar forced on it through various means.

Terrorism is one issue, which I consider as a proxy war carried out by non-State actors, almost like a covert operation.

Therefore, we should strengthen ourselves to a level where no one dares challenge us for conventional or non-conventional war.

'Don't risk your lives; instead eliminate the enemies'

The Indian Army has a very high standard in sacrifice, but I tell them -- agar koi shahid ho gaya toh (if anybody falls a martyr) I definitely bow to them; I would respect him for his shahadat (sacrifice).

But I would request you to not risk your life unnecessarily.

Instead, if you liquidate the enemy, then that is the bigger service to the nation. That is one message I have given to them. 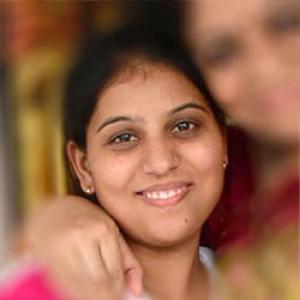