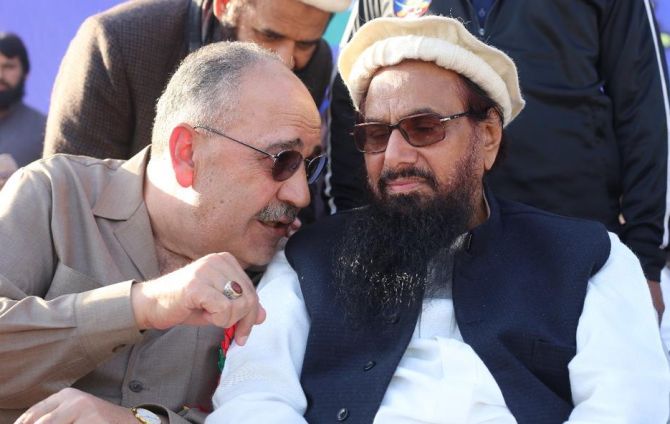 India on Saturday issued a strong demarche to Palestine on the issue of presence of its ambassador to Pakistan at an event of Jamat-ud-Dawah chief and Mumbai terror attack mastermind Hafiz Saeed, terming it as 'unacceptable'.

India's Secretary (economic relations) Vijay Gokhale in the external affairs ministry called Palestinian ambassador in New Delhi Adnan Abu Al Haija to the South Block after which the ministry said, "The concerns were conveyed both in New Delhi to the Palestinian Ambassador and in Ramallah to the Minister of Foreign Affairs and Expatriates, State of Palestine."

'(The) government of India has strongly conveyed to the Palestinian side that the Palestinian Ambassador in Pakistan's association with terrorist Saeed, who is proscribed by the United Nations, at an event in Rawalpindi on 29.12.2017, is unacceptable,' the ministry said in a release.

It said the Palestinian side has conveyed 'deep regrets' over the incident and assured India that they are taking serious cognisance of their ambassador's presence at this event.

'They have said they will deal with this matter appropriately. It was also conveyed that Palestine highly values its relationship with India and stands with us in the war against terrorism, and will not engage with those who commit acts of terror against India,' it said.

The government takes note of the assurances given by the Palestine envoy, who informed India that his government had decided to recall its Ambassador to Pakistan Walid Abu Ali.

Talking to PTI after his meeting, Haija said Ali has been recalled for attending the rally organised by Saeed.

Asserting that Ali's action was not 'acceptable' given the close and friendly ties between India and Palestine, the top envoy said Ali has been given couple of days to pack and return from Islamabad.

"The Palestine government has told Ali that he was not its envoy to Pakistan anymore," Haija said.

Difah-e-Pakistan Council is an association of religious and extremist groups in Pakistan, headed by Saeed.

Arrest Hafiz Saeed for his crimes: US to Pak

US expresses concerns about Hafiz Saeed running for office in Pak