The Indian policy on Sri Lanka in the 1980s, the formative years of the LTTE, provided encouragement to the separatist group, a new book has claimed.

The book, Gota's War, talks about India's "covert" role in LTTE's growth as the outfit undertook frequent terrorist strikes in the island.

The book authored by C A Chandraprema was launched on Monday in the presence of the president Mahinda Rajapaksa.

It delves in to the history of the Tamil separatism waged by the LTTE and the ground swell of support it gained emanating from policy flaws of the successive administrations.

To drive home the point of Indian influence, Lalith Weeratunga, presidential secretary, who addressed the gathering took a trip down memory lane.

Weeratunga said that the late J N Dixit, then Indian high commissioner in Colombo, gave an ultimatum to the then Sri Lankan President Junius Jayawardene to go slow against the LTTE.

"If not, Dixit had warned that New Delhi would offer LTTE with military assistance. The role our neighbour India played is discussed at length in this book. The author described the role played by India during the various stages of the conflict. The author strongly believes that that India had a strong role in the conflict in the mid 1980 terrorist attacks", Weeratunga told the gathering.

He stressed the point that Rajapaksa regime would not have cowed if similar pressure was brought on him when he was guiding the final stages of the victorious military campaign against the LTTE in 2009.

Senior minister Sarath Amunugama said that president Rajapaksa did not give in to international pressures at the final stages.

He said the then British Foreign Secretary David Miliband and his French counterpart Bernard Kouchner's pleas on behalf of the LTTE urging the government to stop its military campaign was ignored by the president.

The book highlights the single minded dedication showed by the Rajapaksas to end the decades old bloody separatist campaign of the LTTE and how international pressures were treated with disdain by the Rajapaksa brothers in their pursuit of a military solution. 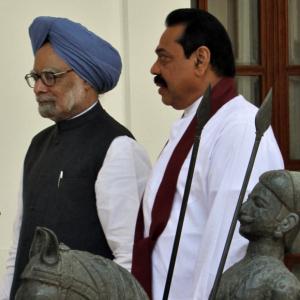 DMK has NOTHING to do with India's vote against SL