India and China held their fourth round of strategic dialogue to discuss a host of issues such as New Delhi's concerns relating to issuance of stapled visas by Beijing for Kashmiris and its bid for a permanent seat on the UN Security Council.

Foreign Secretary Nirupama Rao, who headed the Indian delegation, held talks with her Chinese counterpart Vice Foreign Minister Zhang Zhijun in Beijing. The talks are regarded as a part of a wider consultative process to prepare the ground work for next month's visit of Chinese Prime Minister Wen Jiabao to New Delhi.

Rao's talks came close on the heels of a lengthy bilateral meeting between External Affairs Minister S M Krishna and his Chinese counterpart Yang Jeichi on the sidelines of Russia-India-China Foreign Ministers summit at Wuhan in China. The two ministers had covered a host of issues relating to mutual concerns.

bilateral, regional and global issues in detail. India is looking to China to address its major concerns like stapled visas being issued to residents of Jammu and Kashmir by Beijing despite its protests. The issue turned out to be a major stumbling block in bilateral ties as the recent refusal of visa to top Indian General B S Jaswal on the ground that he headed troops of Northern Command, which included Jammu and Kashmir, resulted in India putting a hold on defence exchanges with China.

Also the endorsement of India's candidature for the permanent seat in the UNSC by US President Barrack Obama during his visit to New Delhi has left only China among the five veto wielding members of the UNSC to take a stand on it as the other four has tentatively indicated their support. Also a host of other issues including India's concerns over China's plans to build a dam over Brahmaputra river and reported presence of Chinese personnel for various projects in Pakistan-occupied Kashmir were expected to figure in the talks.
K J M Varma in Beijing
Source: PTI© Copyright 2020 PTI. All rights reserved. Republication or redistribution of PTI content, including by framing or similar means, is expressly prohibited without the prior written consent.
Related News: UNSC, China, India, New Delhi, Nirupama Rao
SHARE THIS STORY
Print this article 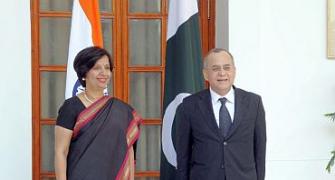