Congress has indicated it won't settle for less than 50 seats in any non-BJP alliance, unlikely if a JD(United)-RJD deal does take place. Kavita Chowdhury reports 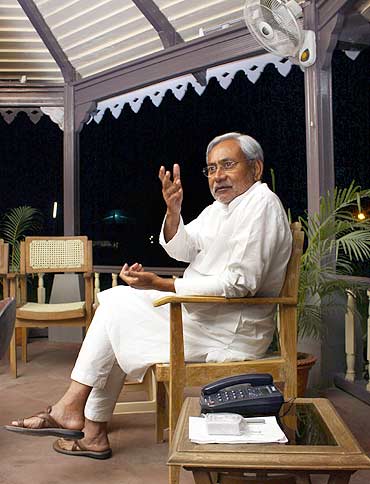 Congress party sources say it intends to ask for nothing less than 50 seats (of 243 in the state assembly) for the coming elections in Bihar as part of the contentious 'secular alliance' to keep out the Bharatiya Janata Party.

The major partners in the said alliance are supposed to be Chief Minister Nitish Kumar's Janata Dal-United and Lalu Prasad's Rashtriya Janata Dal.

Sources disclose that the RJD is demanding it be given 145 seats to contest, quite impossible if the Congress is to contest 50 seats.

In the 243-member legislature, the JD(U) has 115 at present and the RJD has 22. However, their respective vote shares in the general election of last year were 23 per cent and 19 per cent.

JD(U) president Sharad Yadav said on Thursday that an alliance with the RJD was very much on the anvil, to address reports that it would not come off, given the conditions each is placing.

As for the Congress, it says it is backing Nitish Kumar. The CM is slated to meet Congress Vice President Rahul Gandhi in a week.

According to party insiders, Gandhi himself prefers Kumar as an ally to Lalu Prasad.

A Congress senior from Bihar said, "We cannot forget that it was Lalu in the 2014 polls who wanted to marginalise us. He talked of having Ram Vilas Paswan as an ally but skewered the situation in such a way that Paswan went off to the BJP. In 2009 as well, he had marginalised us but then aligned with Paswan. So, we don't have too much faith in Lalu."

He added, however: "But, we want all like-minded parties to come together to defeat the BJP."

The party has only four seats in the present assembly but has a vote share close to 10 per cent; it is confident it can have its way on getting at least 50 seats in the proposed alliance with the JD(U).

Insiders say Lalu Prasad, also a former and long-time chief minister, is unwilling to settle for a lesser number of seats than Nitish Kumar’s party. The ongoing tussle between JD(U) and RJD is as much about seat sharing as about who will be the alliance's proposed CM-face.

Stepping out of the meeting, he said should the talks between the two regional parties fail, the Congress would support Nitish Kumar, the "development face". Choudhry was one of the state chiefs chosen by Rahul Gandhi.

It is known that Rahul had been in favour of the Congress going it alone in 2014 rather than accept a humbling deal at the hands of the RJD. However, he did not have his way.

Now that he is calling the shots within the party, he has made it clear that in the Bihar polls, the Congress is to be strengthened and not dictated to.

All eyes, therefore, are on the JD(U)-RJD tussle.