Cold wave conditions persisted in northern states of the country on Tuesday, with Uttar Pradesh's Kanpur hitting the zero-degree mark and Sikar in Rajasthan recording a low of 1 degree Celsius. 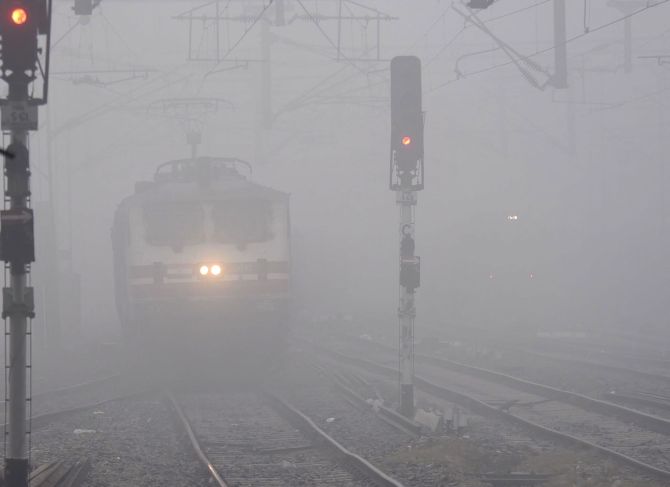 IMAGE: A train runs through a dense layer of fog on a cold winter morning in Patna, on Tuesday. Photograph: PTI Photo

A day after Delhi experienced the coldest recorded day in December, the sun shone bright bringing some respite though icy winds swept the city which saw a low of 4.8 degrees Celsius.

Delhiites would get some relief from the frigid conditions as the India Meteorological Department said that there would be 'no cold wave in Delhi till January 4 (Saturday) and temperatures will rise further'.

There will be moderate fog in Delhi on Wednesday and very light rain on Thursday. 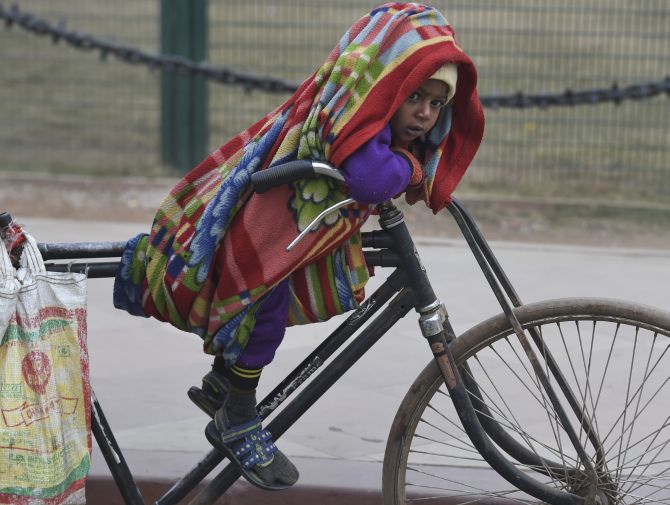 IMAGE: A child covers himself with a blanket to keep himself warm on a cold winter morning at India Gate in New Delhi, on Tuesday. Photograph: Atul Yadav/PTI Photo

According to a forecast by the MeT Department, snowfall is most likely in Himachal Pradesh's Lahaul-Spiti and Kinnaur districts on December 31 and in Kashmir Valley from January 1.

In Uttar Pradesh, Kanpur hit the zero-degree mark in the early hours of the day.

Narnaul in Haryana was recorded as the coldest place in the state with a minimum temperature of 2.3 degrees Celsius, followed by Punjab's Amritsar and Ludhiana which shivered at 3.4 and 4.1 degrees Celsius, respectively. 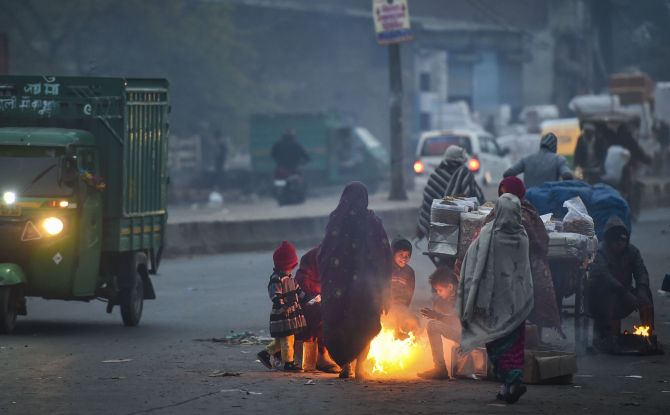 IMAGE: People sit around a small fire to keep themselves warm on a cold winter morning at Rajpath in New Delhi. Photograph: Arun Sharma/PTI Photo

In Rajasthan, Sikar remained the coldest place in the state at 1 degree Celsius, followed by Ganganagar 2.1 degrees, Jaipur and Bikaner at 2.7 degrees Celsius.

In the hill-state of Himachal Pradesh, Kufri, Manali, Dalhousie, Solan and Kalpa shivered at sub-zero temperatures.

The state's lowest temperature of the day was recorded in Keylong at minus 8.2 degrees Celsius.

Snowfall is most likely to occur in higher hills of Lahaul-Spiti and Kinnaur districts on December 31 and January 1 whereas in the middle hills of Shimla, Kufri and Manali on January 2 and 3, Shimla Meteorological Centre Manmohan Singh told PTI. 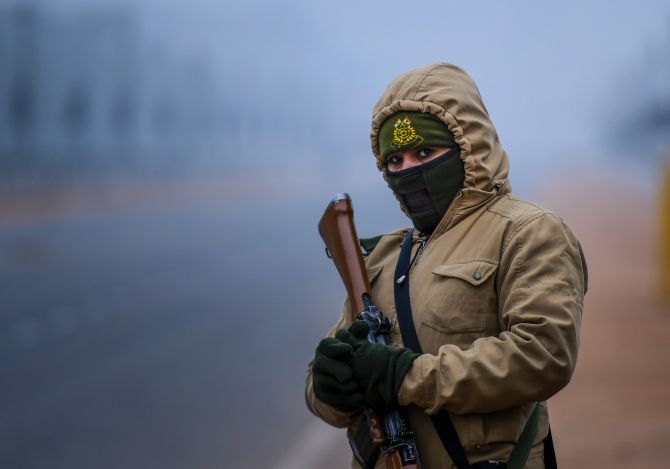 There was some respite from cold wave conditions for residents of Kashmir Valley as the minimum temperature improved, even as the weather office has forecast snowfall in the region from Wednesday.

The night temperature across the valley improved on Monday night, providing relief to residents, an official of the Meteorological Department here said.

According to the IMD, thundershowers accompanied by hail are expected in most of Madhya Pradesh on New Year's Day.

The visibility was very low due to fog in Rewa, Shahdol, Gwalior and Chambal divisions, the IMD said. 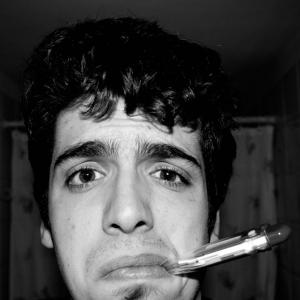 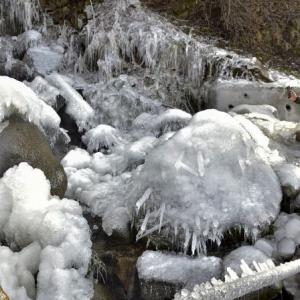 Cold wave intensifies in Kashmir; Leh shivers at minus 17.1 Celsius