Dr Rahul Khurana, a surgeon at the Wilmer Eye Institute at the Johns Hopkins University School of Medicine, and Captain Marisha Malik, of Potomac, Maryland, were among the Ten Outstanding Young Americans selected nationally by the United States Junior Chamber (Jaycees).

The TOYA program, established in 1938, is one of the oldest recognition events in America. The Jaycees recognise 10 young men and women who best exemplify the finest attributes of America's youthful achievers.

Captain Malik, 27, is currently the officer in charge of the 18th Aircraft Maintenance Unit at Eielson Air Force Base, Alaska. She leads teams delivering combat-ready aircraft, equipment and people.

She directs and implements maintenance plans supporting more than 3,000 sorties and 5,000 flying hours annually, and is responsible for the morale, training, discipline, and management of 230 personnel in nine Air Force specialties.

The captain was born of an Indian father and a Burmese mother. She was a student at The Holton-Arms School in Bethesda and graduated in 1998. She obtained her bachelor's degree in criminal justice in 2002 from the University of Arizona and joined the US Air Force as a second lieutenant. 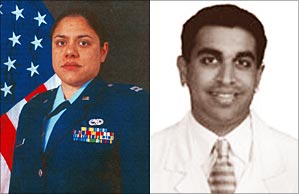 Dr Khurana, 31, has been actively involved in the community, tutoring underprivileged children, spending time with Alzheimer's patients and participating in humanitarian missions abroad to restore vision to those too poor to obtain care.

He has numerous scientific contributions to his credit;  as a medical student providing new insights into the development of glaucoma; as an intern discovering a fatal complication of a popular weight-reducing surgery and devising guidelines to prevent it; and authoring more than 27 papers that have revealed new discoveries regarding various eye diseases and potential medical and surgical treatments.

He received the American Medical Association's Foundation Leadership Award in 2007, which recognized him as one of the top 51 emerging national leaders expected to make a strong impact on the future of medicine; was named a Heed Ophthalmic Foundation Fellow in 2006, an award given to the most promising leaders in ophthalmology; and was named the Pan-American Association of Ophthalmology Paul Kayser International Travel Scholar in 2007, an award that recognises exceptional ophthalmologists from North America who travel and work with ophthalmologists in South America to expose them to excellent clinical and research training.

A Correspondent in New York
SHARE THIS STORY
Print this article