News
Business
Movies
Sports
Cricket
Get Ahead
Money Tips
Shopping
Sign in  |  Create a Rediffmail account
Rediff.com  » News » I will not apologise for what I have done: Rajoana 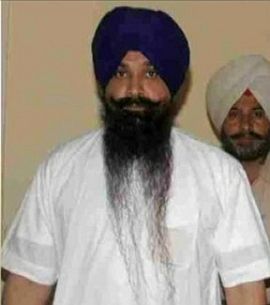 "I am neither going to ask for mercy nor will I apologise for what I have done." That's what Babbar Khalsa terrorist Balwant Singh Rajoana, one of the three assassins of former Punjab chief minister Beant Singh on death row, told his sister when she visited him in Patiala jail on Wednesday.

Talking exclusively to rediff.com, Rajoana's sister Kamaljit Kaur said: "He stands for Khalistan and we support him. We will stand with him through thick and thin. My brother is in high spirits and he is ready for any eventuality."

When probed, Kamaljit said that during her meeting with Rajoana, she urged him to write an appeal to the people of the state to maintain peace during the bandh that was called by various Sikh organisations.

Normal life was crippled across Punjab on Wednesday, which witnessed sporadic violence during the day-long bandh called by radical Sikh outfits.

Most business establishments were shut and road and rail traffic was disrupted at many places as Sikhs, sporting saffron headgears and brandishing swords, hit the streets on motorcycles shouting slogans in support of Rajoana.

Saffron flags dotted market places and house-tops in cities and villages as women too joined the protest expressing solidarity with Rajoana. Areas around the Golden Temple, the main sacred place of Sikhs, were clogged with protesters.

Rajoana was very upset when then Punjab chief minister Beant Singh gave a freehand to Director General of Police K P S Gill to deal with terrorism with an iron hand.

On August 31, 1995 as Beant Singh stepped out of his office at the high-security Punjab civil secretariat in Chandigarh, a suicide bomber blew himself up, killing the then chief minister and 17 others. Rajoana was the second human bomb to be used in case.

He cooks dal for himself in the jail and has it for breakfast, lunch and dinner along with chapatis. He jogs to keep himself fit.

Meanwhile, Gurkirat Singh Kotli, grandson of Beant Singh, has said that the Union government's decision to stay Rajoana's hanging was in the interest of peace and harmony in the state.

"The hard-earned peace cannot be frittered away. Any step in the interest of peace and harmony in the state will always be supported by us," he said.

Kotli, a Congress MLA from Khanna, said the family felt relieved and satisfied over the decision.

The step would go a long way in establishing peace in the state, he said.