I have shed my blood in Kashmir Valley: Army chief

Source: PTI
July 09, 2012 16:49 IST
Army Chief Gen Bikram Singh, who has spent a major part of his 40 years of service in Jammu and Kashmir, on Monday recalled his days in the Valley saying that he has "shed his blood" there as he was wounded in a terrorist incident there.

"The Kashmir Valley is always on my mind. I have shed my blood, as I was hit by a bullet while serving there. I have done a number of tenures in that area as I commanded the 15 Corps and the 10 Division and my battalion also there," he said.

The army chief was interacting with a group of children from Lolab Valley in Kashmir visiting different parts of the country under the Operation Sadbhavna of the force.

As a brigadier, the army chief was hit by a bullet in a terrorist attack when he was commanding the 1 Sector Rashtriya Rifles in south Kashmir. He was on his way back to Anantnag after visiting various army units. When the army convoy stopped at Janglat Mandi, a militant disguised as a beggar opened indiscriminate fire upon the army men.

The army chief has done the important command tenures in battalion, brigade, division and Corps in the state only. He promised the children that he would visit their school whenever he is Jammu and Kashmir the next time. 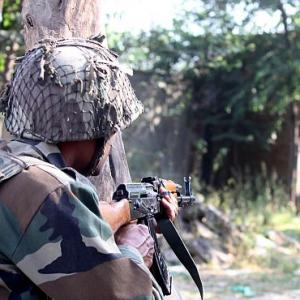