News
Business
Movies
Sports
Cricket
Get Ahead
Money Tips
Shopping
Sign in  |  Create a Rediffmail account
Rediff.com  » News » I am proud of you Amir Khan: Kejriwal

I am proud of you Amir Khan: Kejriwal 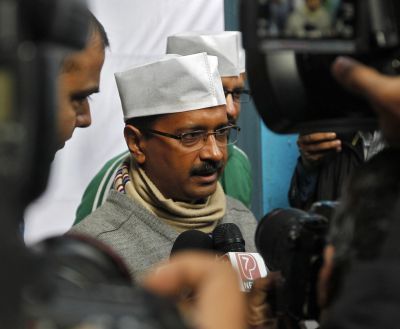 Continuing his support for Bollywood actor Aamir Khan whose "intolerance" remarks triggered controversy, Delhi Chief Minister Arvind Kejriwal on Wednesday said he is proud of him.

"We r proud of u @aamir_khan," the Delhi chief minister wrote on Twitter along with the picture of statement issued by Khan.

Earlier on Wednesday, Khan came out with a statement, saying he is "proud to be an Indian".

"First let me state categorically that neither I, nor my wife Kiran, have any intention of leaving the country. We never did, and nor would we like to in the future.

"Anyone implying the opposite has either not seen my interview or is deliberately trying to distort what I have said. India is my country, I love it, I feel fortunate for being born here, and this is where I am staying," he said.

On Tuesday, Kejriwal had expressed his admiration for Khan for "speaking up" against "intolerance and insecurity" in the country, and asked the Centre to take concrete steps to instill sense of security among people.

"Every word that @aamir_khan said is so true. I admire him for speaking up," Kejriwal had tweeted. Khan had said that he was "alarmed" by a number of "incidences" and that his wife had even suggested "leaving" the country, while addressing the audience of Ramnath Goenka Excellence in Journalism Awards function on Monday.