News
Business
Movies
Sports
Cricket
Get Ahead
Money Tips
Shopping
Sign in  |  Create a Rediffmail account
Rediff.com  » News » I am a rapist? Women like me. Women love me: Yoga guru Bikram 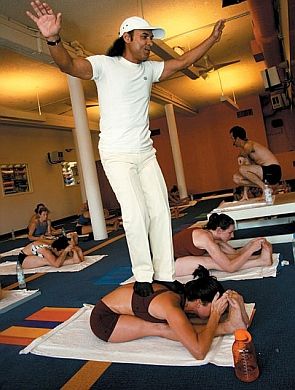 An Indian-American yoga guru, who has been accused of rape and sexual assault by six former students, has strongly denied allegations, saying he would not force himself on anyone because women love him.

Bikram Choudhury, 69, founder of the Bikram Yoga -- a form of the exercise practiced in hot rooms -- says he never assaulted the women and they are accusing him after being "influenced" by their lawyers.

"I want to... tell the truth to the world, that I never assaulted them," Choudhury told CNN in an interview, his first comments on the allegations.

"So if I really wanted to involve the women, I don't have to assault the women."

He said he feels sorry for his accusers, claiming they've been manipulated by lawyers to lie.

"I have nothing against them. I don't think they are bad people. It's not them saying that," he said.

"They are influenced by somebody."

Choudhury vowed to clear his name but said the damage has already been done to his family.

An emotional Choudhury said his wife "never looks at him anymore".

"My children, my wife... we only die once in our life. I'm dying every day when I get up in the morning."

"How can I share my heart, my spirit? Twenty-four hours a day, I work harder than any other human being. And this is the reward? I'm a rapist?" he said.

The Bikram Yoga form of exercise is among the most renowned forms of the art with participants performing yoga postures in rooms heated to 105°F (40.6°C).

Choudhury is facing lawsuits filed by six women with a latest case filed in the Los Angeles Supreme Court in February by a Canadian woman identified as Jill Lawler.

Another former student Sarah Baughn, who has accused Choudhury of sexual assault, said in the CNN report that he is lying and "hiding behind" his yoga practise so people do not believe he is capable of "hurting people.

The civil lawsuits filed in Los Angeles Superior Court describe Choudhury as someone who preyed on young women who looked to him for guidance.

"It's not truth. I don't do that. I don't have to," he said adding that he makes it a practice to never be alone with any of his students.

"I have no intention to have sex with any of my students or any women," said Choudhury, who said he's been married to his wife for more than 30 years.