The hostage drama in Hyderabad involving a suspended head constable and a superintendent of police ended on a peaceful note. The state Director General of Police Dinesh Reddy intervened and successfully persuaded Head Constable Giriprasad Sharma to release SP Lakshmi Narayana. The drama ended four hours after it started.

The Hyderabad police including the anti terrorist unit Octopus had surrounded the area near Birla Mandir in Saifabad where the suspended head constable had taken his senior officer hostage in protest against his suspension.

Led by senior police officials, a large number of policemen had surrounded the place where the Superintendent of Police Lakshmi Narayana was being held hostage by Giriprasad Sarma since 7 pm.

The police officials were trying to establish a contact with the hostage taker who preferred to communicate through the TV channels.

Sarma alleged that another officer, additional SP Vijay Kumar had suspended him with out any reason and was harassing him for the last 8 months. He demanded his immediate suspension.

But it was not clear how and why the SP came to the place where the head constable made him hostage.

"If the police officials make any hasty move and try to rescue the SP, I will burn him and commit suicide," Sarma told a TV channel. He claimed that he had 40 liters of petrol.

In an apparent preparation for action against the hostage taker and to rescue the SP, the police officials were trying to move the TV camera crews and reporters form the scene, which is near the famous Birla Mandir.

Responding to the crisis, the state Home Minister P Sabita Indra Reddy also went on TV assuring Sarma that his demands will be met and a probe will be ordered into the affairs of the Police Transport Organisation. 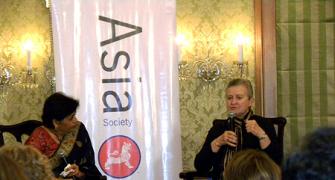 'We find some of the hesitations in India frustrating'