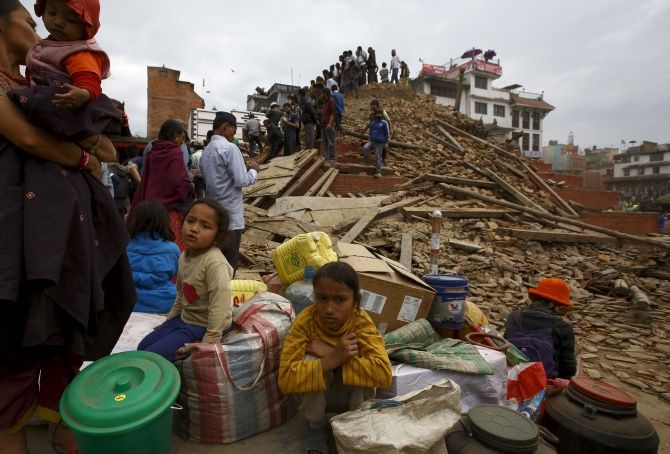 People sit with their belongings outside a damaged temple in Bashantapur Durbar Square after a major earthquake hit Kathmandu, Nepal. Photograph: Navesh Chitrakar/Reuters

A powerful earthquake flattened houses and buildings in Nepal on Saturday, killing nearly 1,500 people as the worst temblor in 80 years destroyed the iconic Dharhara tower and renowned Darbar Square in the heart of the capital.

The quake measuring 7.9 on Richter scale, which was followed by 16 aftershocks of magnitude 4.5 or greater, killed 876 people including over 250 in Kathmandu and left several thousands injured and hundreds missing across the country. 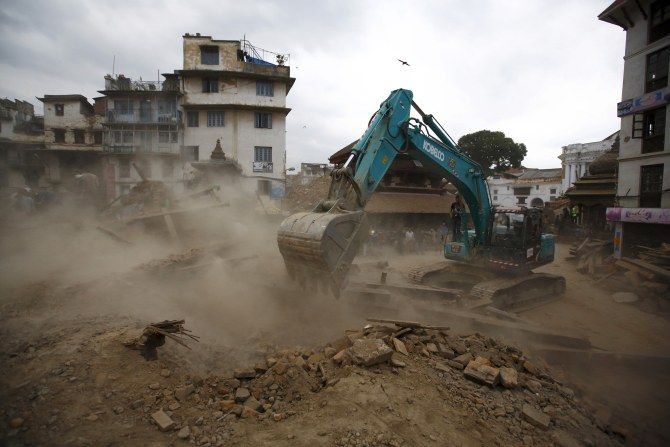 An excavator digs the rubble to search for the bodies after an earthquake hit, in Kathmandu. Photograph: Nivesh Chitrakar

According to Nepalese home ministry figures, 150 people lost lives in neighbouring Bhaktapur, 67 in Lalitpur and 37 in Dhading district. Besides, 20 people were killed in the country's eastern region, 33 in western region and rest in other parts of the Himalayan nation. 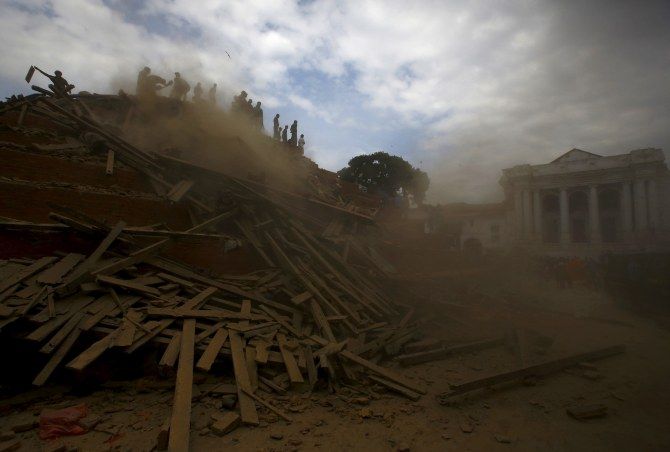 People work to rescue trapped people inside a temple in Bashantapur Durbar Square after an earthquake hit, in Kathmandu, Nepal. Photograph: Navesh Chitrakar/Reuters

The earthquake around 11:56 am with epicentre at Lamjung, around 80 kilometers northwest of Kathmandu, had its impact in several cities in Bihar, West Bengal and UP and tremors were felt across vast stretches of east and northeast India. 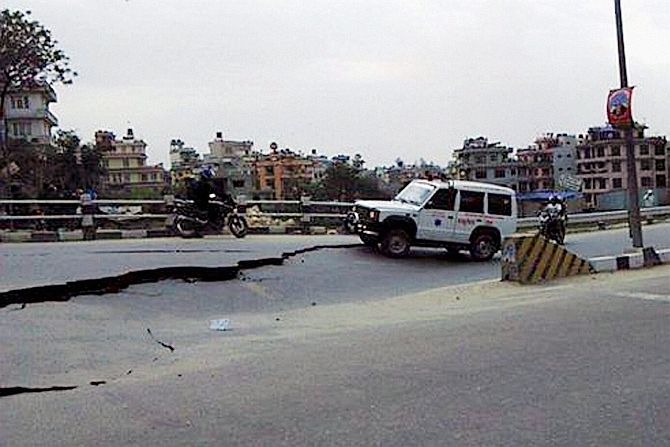 Image: A damaged road after a powerful earthquake in Kathmandu on Saturday. Photograph: PTI Photo

It was also felt in Southern and Western parts of India, China, Bhutan and as far as Pakistan and Bangladesh.

Miraculously the famous 5th century Pashupatinath temple here was undamaged, while a number of old temples were razed. Several buildings, most of them old, in the densely-populated KathmanduValley collapsed, killing hundreds. 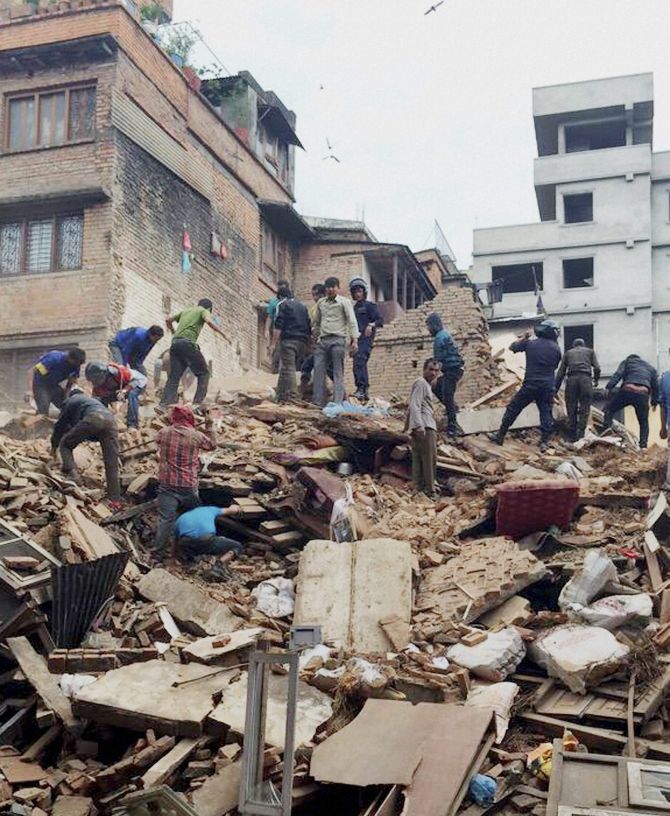 Image: The debris of a collapsed building after a powerful earthquake in Kathmandu. Photograph: PTI Photo

At least 180 bodies have been retrieved from the debris of two-century old nine-storey landmark Dharhara tower in the centre of the capital.

Kathmandu's Darbar Square, a United Nations Educational, Scientific and Cultural Organisation World Heritage site, was completely damaged in the quake which was the worst to hit Nepal and surrounding regions after the earthquake of 8.4 magnitude which occurred along the Nepal-Bihar border in 1934. Image: What is left of the Bhimsen Tower in Kathmandu. Photograph: Twitter

Video footages showed a number of buildings having caved in or developing huge cracks. Many of the city roads have suffered wide craters in the impact, affecting movement of vehicles and rescue operations.

The army, the police and emergency workers were pressed into service for rescue of those trapped and rushing injured survivors to hospitals. Many of the injured could be seen suffering bleeding injuries covered in dust from the debris. Around 50 doctors have arrived from India to provide emergency services.

The daughter of a local employee in the Indian embassy died and his wife suffered serious injuries when a house in the mission complex in Kathmandu collapsed during the quake. 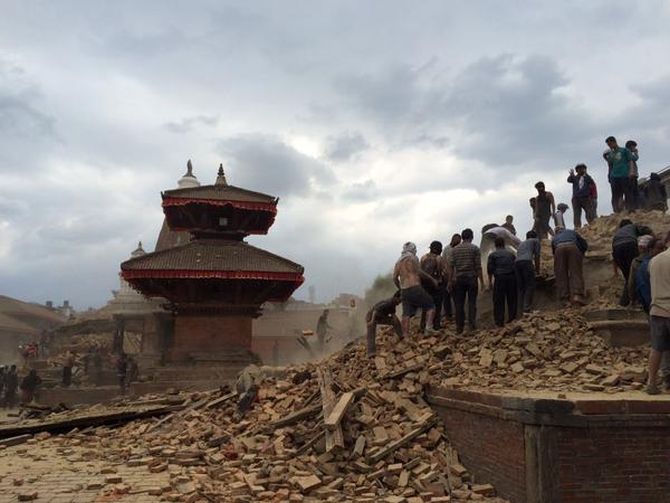 Nearly 125 people from Maharashtra and Telangana are stranded in Nepal after the earthquake. Around 80 people from Nashik had gone to Nepal for pilgrimage while 15-20 people were on a trekking expedition. 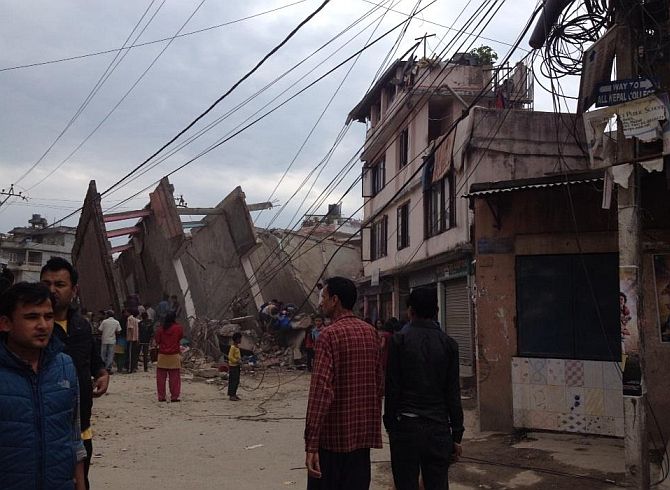 Twenty-five tourists from Hyderabad, who are in Kathmandu, are safe. "Now, all of us are safe in an open ground, close to the Pashupatinath temple in Kathmandu," Gowrishankar, who took the tourists, said.

Hospitals were over-crowded with injured, with many of them being treated in the open outside the hospitals. An emergency cabinet meeting has announced 29 districts as crisis zones, the Home ministry said.

Gyanendra Shrestha, an official at the Ministry of Tourism, said that 10 people including foreign climbers have been killed in the avalanche triggered by the earthquake.

Nepal's TV channels showed dozens of bodies lined up on ground after the earthquake. Television pictures also showed some of the people rescued from under the debris.

"We need support from the various international agencies which are more knowledgeable and equipped to handle the kind of emergency we face now," Information Minister Minendra Rijal said.

Initially measured at 7.5 magnitude, the quake was later revised to 7.9, with a depth of 15 kilometres. National radio warned people to stay outdoors and keep calm as more aftershocks were feared. The TribhuvanInternationalAirport has been closed. 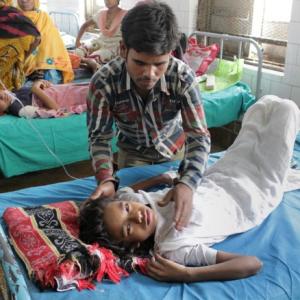 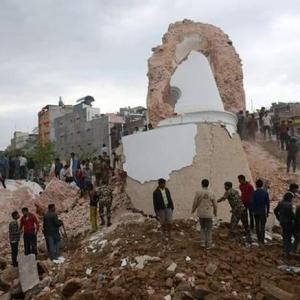