The MNS -- which aggressively compelled a ban on employing Pakistani actors and others in Bollywood last year -- has been subdued in comparison after a Marathi manoos was sentenced to death in Pakistan.
Rediff.com's Prasanna D Zore finds out what Raj Thackeray's party plans to do in the Kulbhushan Jadhav case. 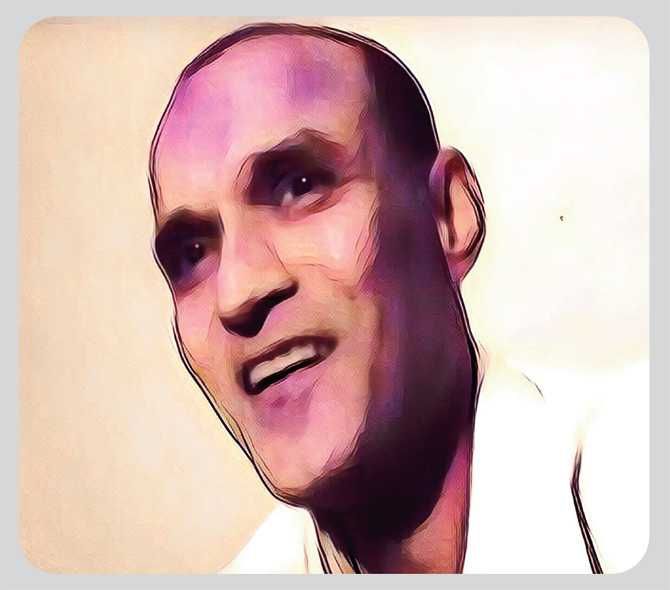 The Maharashtra Navnirman Sena was the first political party to protest against the death sentence awarded to Mumbai resident Kulbhushan Jadhav by a Pakistan military court.

On Tuesday afternoon, the MNS, whose political fortunes have been on the downswing in recent years, burnt the Pakistan flag in Dadar, north-central Mumbai, to express its solidarity with Jadhav and build pressure on the Narendra Modi government.

"By these protests we want to put pressure on the Indian government so that they understand the public sentiment on the ground. Keeping these sentiments in mind they can create more pressure on Pakistan," Sandeep Deshpande, an MNS leader and former municipal corporator, tells Rediff.com over the telephone.

Interestingly, the MNS, which is known more for its streetfights and violent protests, wants to continue building more pressure on the Modi government through peaceful means.

"Today, we have burnt the Pakistani flag; the day after tomorrow (Thursday) we have organised a bike rally from Prabhadevi to Mahim in support of Kulbhushan Jadhav, and on Sunday we are planning a walkathon," Deshpande elaborates on his party's protest calendar.

Explaining the objective of these protests, he adds, "The purpose of these peaceful protests is to garner public support and build pressure on the government to do whatever it takes to save Kulbhushan Jadhav from the gallows."

Deshpande denies that the MNS will gherao the Pakistan high commission in New Delhi and says the party's protest will be limited to Mumbai. "We are a Mumbai-based party," he points out.

Retired Indian Navy commander Kulbhushan Jadhav is a Maharashtrian, and a resident of Mumbai. His father Sudhir Jadhav was a former assistant commissioner of police in the city.

Deshpande also accepts that the MNS' protests will have no bearing on the Pakistan government, but he emphasises that his party cannot be a mute spectator to such a gross violation of justice.

"We are really hopeful that this can bring some pressure on Pakistan. We just can't wait and watch what the central government is doing. We just can't sit quiet in our AC cabins and relax when one of our citizens has been accorded a death sentence in Pakistan," he says.

"Why just political parties? We would want every citizen to come and join our protests," he says.

"In any democratic country this is the way to protest against such injustice," says Deshpande whose party has a reputation for strong-arm tactics.

Party leaders, he adds, have not consulted MNS President Raj Thackeray before drawing up an action plan.

"These protests are on behalf of the MNS," he says. "You don't need to ask the party president for everything. We have asked our second rank leadership and we have got an okay from them."

MORE features on KULBHUSHAN JADHAV in the RELATED LINKS below...