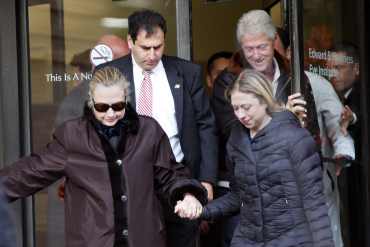 United States Secretary of State Hillary Clinton has been discharged from a New York hospital after treatment on blood clot in a vein of her brain, the state department said.

Clinton, 65, who has not been seen in the public since December 7 because of illness, was discharged on Wednesday evening. She was admitted to New York hospital on Sunday after doctors discovered a blood clot related to the concussion she suffered last month after she fainted and fell down while recovering from a stomach infection.

"Secretary Clinton was discharged from the hospital. Her medical team advised her that she is making good progress on all fronts, and they are confident she will make a full recovery," Deputy Assistant Secretary of State Philippe Reines, also her spokesman said in a statement.

"She's eager to get back to the office and we will keep you updated on her schedule as it becomes clearer in the coming days," the statement said.

"Both she and her family would like to express their appreciation for the excellent care she received from the doctors, nurses and staff at New York Presbyterian Hospital Columbia University Medical Center," Reines said.

Earlier on Wednesday afternoon, the US media reported that Clinton was spotted leaving the hospital and then seen returning 15 minutes later. The state department statement did not have any reference to it, nor did it respond to any questions on this.

"Clinton, last seen in public on December 7, exited from a side entrance at New York-Presbyterian Columbia Hospital and returned about 15 minutes later," The New York Daily reported.

She was seen leaving the hospital on Wednesday afternoon along with the husband, Bill Clinton, the former US president, and their daughter Chelsea Clinton.

Earlier in the day, her spokesperson said that Clinton has been talking to her staff and receiving memos.

In the last media advisory issued on December 31, her doctors said that she was recovering well. "As we said in the statement on New Year's Eve, she has been talking to her staff, including today. She's been quite active on the phone with all of us. But she also made some calls on Saturday to a couple of foreign officials."

"She spoke to Brahimi, the UN special envoy on Syria, for some half an hour on Saturday, discussing his most recent visit to Syria and the state of play there," Victoria Nuland, the state department spokesperson told reporters at her daily news conference.

She also talked on Saturday to Qatari Prime Minister and Foreign Minister Al Thani also on Syria but on support for the Palestinian Authority. They talked a little bit about Afghanistan as well.  He is a regular interlocutor of hers," she said.

"So she has begun to pick up her regular phone contact with some of her counterparts," she added.

Clinton, who last week was voted the most admired woman in the world for 11th straight year, is all set to leave the post of top US diplomat, which she has successfully lead for the last four years.

Highly popular among the Democrats and nationwide, Clinton is seen as the top presidential contender for her part in the 2016 elections.

Under US laws a president can serve a maximum of two four-year terms. Obama, who won the November 2012 presidential elections, will be sworn in for the second term on January 21.