Prime Minister Narendra Modi's success at courting Indians abroad have been as much a result of his old contacts as efforts by a dedicated arm of the BJP abroad. Archis Mohan reports. 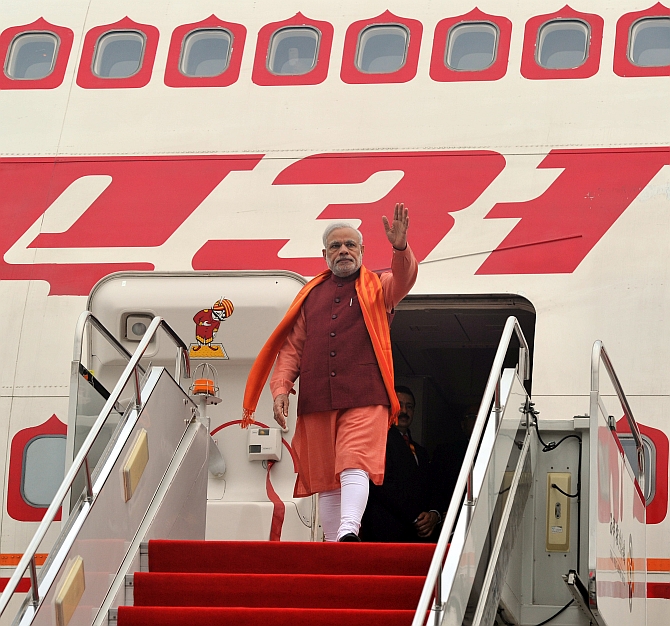 Ceaselessly courting the Indian diaspora and tending to it as a political constituency has been one of the success stories of Prime Minister Narendra Modi's first year in office.

The gains have been a result as much of the hard work put in by Modi's old contacts among Indians living abroad, as by a dedicated team of the foreign arm of his party, the Overseas Friends of the Bharatiya Janata Party.

This aggressive engagement with the diaspora, at least with certain sections of it, has been achieved after some internal "cleansing". And, despite words of caution by the foreign policy establishment, which has viewed the overweening presence of the Sangh Parivar in these events as potentially divisive of a diaspora that is already much divided on caste, linguistic and religious lines.

The outreach, according to those in the know, has and will primarily focus on the "young and politically conscious" in the more affluent parts of the world like North America, Western Europe and Australia.

The next step, a source said, will be to build these millions of young professionals as a "force multiplier" for Indian diplomacy.

The OFBJP plans to prepare literature that could help the Indian diaspora engage with lawmakers in these countries over the positivity the Modi-led government has infused in the economy or even to counter propaganda by Pakistan on Kashmir.

The BJP and the Modi government, however, will be circumspect about direct engagement with those living in the neighbouring countries, lest it leads to bilateral complications, for example with Hindus in Bangladesh.

The party is also unlikely to be overly enthusiastic in reaching out to the descendants of the girmitiyas, the indentured labourers from India in the mid-19th to early 20th century.

While the government has done its bit with Modi visiting Fiji and Mauritius, party strategists say these communities have cultural roots with the land of their ancestors but are largely uninterested in India's contemporary politics.

The present leadership at the OFBJP, which took over late last year, is now working to consolidate the gains made by the rousing reception Modi received from the diaspora in the US, Canada, Australia and Germany.

An end of the year visit to the UK is in the works. Sources say the PM would also like to pay a multiple country visit to Kenya, Uganda and Tanzania -- African countries with affluent Gujarati business people. He had visited Kenya more than once during his chief ministerial tenure.

One of the first decisions of Amit Shah, after he took over as BJP president in August 2014, was to replace OFBJP chief Vijay Jolly with Vijay Chauthaiwale, scientist and former vice-president of the Torrent group.

According to sources, the new team at the helm, with substantial help from party General Secretary Ram Madhav, has gone about rebuilding the overseas arm.

It has decided to shut down several of its 46 foreign chapters, mostly single-member outfits headed by people found to be giving a "bad name" to the party.

The strongest message to the old guard was conveyed by Modi himself.

The PM, as he obliged hundreds of supporters keen to get selfies clicked with him at New York's Madison Square Garden, picked out some of these leaders waiting their turn in the queue, and asked them to step aside.

But Jolly has taken the snub on his chin, and says he is "not sitting idle" as, he continues to be busy in New Delhi's embassy circuit. He lauds the PM's efforts and recounts how he has played the role of a "catalyst" in bringing the number of OFBJP chapters from two to 46 from 2011 to 2014.

"The hard days for the OFBJP are over. The soft days are ahead," Jolly says.

The former Delhi MLA believes the "need of the hour is to be expansionist", even if it is a branch in Greenland run by two people.

"We need to touch base with as many among the diaspora as possible and to indoctrinate them with the BJP ideology," he says.

Jolly's claims aside, old-timers credit Modi for being one of the first in the Sangh Parivar to wake up to the need to engage the diaspora more assiduously.

In the 1990s, Modi visited the US and Western Europe. An old office hand at the BJP headquarters recalls how party workers would troop to Modi's one-room tenement to watch him work on his new laptop, donated to him by an NRI, at a time when laptops were a rarity in India.

More importantly Modi, then in his 40s, made lifelong contacts and friends.

This support base helped him when he was denied a US visa in 2005.

It was these supporters that facilitated his video conferences with investors in Europe and lobby with these governments that eventually made them relent.

His visits to the US and Canada were also his way of thanking those who have stood by him, like Chicago-based physician Bharat Barai.

Modi's visit to Canada opened the eyes of Indian diplomats to the political relevance of the diaspora in their adopted country. Indians are a mere three per cent of the Canadian population, but concentrated in pockets and, therefore, vital in some constituencies.

Patrick Brown, the 37-year-old leader of the Progressive Conservative Party of Ontario, organised a separate dinner for the Indian community during Modi's visit to Toronto.

"Those in attendance were surprised that Modi dropped in, addressed Brown as 'Patrick bhaim', who returned the PM's greeting with 'Narendra bhai'," a source said.

"The PM's outreach to the diaspora has led to better treatment by Indian consulate officials and his well-attended events give a boost to the community in that country. The Canadian PM, for example, travelled with Modi on Air India One the entire duration of the Canada visit," Chauthaiwale says, adding Modi's visit becomes an opportunity for all Indian communities to come together.

But foreign policy watchers, including those within South Block as well as sociologists like Ashis Nandy, are wary of the Modi approach towards the diaspora.

"Indeed, the diaspora, at least a certain section of it, has money. But their understanding of India, the complexities of its pluralistic society, is poor. Priority should have been the Indians living in India and that priority has been lost," he says.

In the run-up to Modi's visit to Australia, senior diplomats requested the Prime Minister's Office that the Hindu Swayamsevak Sangh, foreign branch of the Rashtriya Swayamsevak Sangh, should be kept away. None of the events were organised under the auspices of the HSS but its leaders were closely associated with putting together diaspora meetings.

A former diplomat, unwilling to be named, thinks the presence of the party and Sangh could alienate Christians and Muslims among the Indian diaspora.

"Much has been made out by nationalistic groups in the UK on how Hindus and Sikhs have been on the winning side, having voted for the Conservatives, while Muslims voted for the Liberals in the recent elections there," he said.

But the BJP asserts the assessment isn't correct as Muslims, including businessmen belonging to the Pakistani diaspora, and Sikhs have not only attended the PM's events abroad but also contributed to organising these events.

According to a 2014 World Bank study, the India diaspora sent remittances worth $70 billion, the highest for any immigrant group in the world and nearly four per cent of the country's gross domestic product.