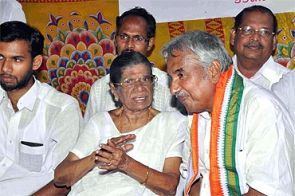 The Kerala Assembly on Thursday witnessed uproarious scenes over the solar scam with the Communist Party of India-Marxist-led Left Democratic Front opposition and ruling United Democratic Front headed by Congress coming face-to-face, leading to the adjournment of the House for the day.

The treasury benches, which exercised restraint amid the LDF onslaught since last week, turned aggressive and engaged in heated exchanges with the LDF members who took to the well of the House during the zero hour.

As the wordy duel heated up accompanied by angry gestures at each other, Speaker G Karthikyan adjourned the House temporarily as he felt the situation could slip out of hand.

When the House assembled after an hour, the opposition raised the issue again claiming that new evidence had surfaced showing that Chief Minister Oommen Chandy had given a letter endorsing the company which indulged in fraudulent deals offering solar energy solutions.

Refuting the charge, Chandy dared the opposition to produce the purported letter of recommendation he had given to the company floated by Saritha Nair and Biju Radhakrishnan, accused in the case.

Chandy said LDF was making the charge on the basis of a statement made by Radhakrishnan's lawyer, who is a co-accused in one of the cheating cases along with the duo.

The slogan-shouting LDF members surged into the well of the House again and the Speaker adjourned the House for the day after rushing through the items on the agenda.

In an apparent bid to dampen the LDF's move to hold an assembly march on Friday demanding Chandy's resignation and judicial probe, the government urged the speaker to cancel Friday's sitting, citing rain calamity as the reason.

Chandy said the legislators will have to go to their constituencies on Friday as the entire state had been affected by downpour.

However, in an embarrassment to the government, CPM's P Sreeramakrishnan, who sought leave for an adjournment on the issue, pointed out that a journal brought out by the Public Relations Department had carried the emblem of the fake company 'Team Solar' in its April last issue.

Responding to the allegation, Information Minister K C Joseph said the PRD Director had already been suspended as he figured in a cheating case having links with the fraudsters.

The government would also inquire if the PRD's publication had carried the fake company's emblem.

After the House rose, LDF members led by their leader V S Achuthanandan marched out raising slogans. They alleged that the chief minister was running away from facing the House.

The scam has assumed a political dimension after two staff members of Chandy were found to have made telephone talks to the accused in the case and they were last week removed from the CM's Office.

The accused in the case, Saritha and her accomplice Biju Radhakrishnan, have been arrested and remanded in custody.

The Opposition has been disrupting the House since last week demanding resignation of Chandy over the issue which the latter has rejected categorically.