The oldest litigant in the Babri Masjid case, 95-year-old Hashim Ansari, who breathed his last in Ayodhya on Wednesday after fighting the Ram Janmbhoomi-Babri Masjid court battle for more than six-and-a-half decades, was keen for an out-of-court settlement on the vexed issue.

This was disclosed by Ansari’s son Iqbal, shortly after the former’s body was laid to rest at a local cemetery in Ayodhya on Wednesday afternoon. Iqbal, whom Ansari has formally entrusted the responsibility of pursuing the long-pending case in courts, told mediapersons that the long-drawn court battle had left his father disillusioned.

“Towards the end of his life, he had started advocating for an amicable out-of-court settlement of the dispute that he had himself taken to court shortly after some persons planted an idol of Lord Ram inside the 16th-century Ayodhya mosque in 1949,” said Iqbal.

Significantly, Iqbal too was in agreement with his father and went on to add that he would not hesitate to push for an amicable settlement through a dialogue. “In keeping with my father’s wishes, I would also like to see that a final solution is arrived at through a dialogue and without any kind of conflict between Hindus and Muslims,” he pointed out.

Iqbal runs a tyre puncture repair shop close to the modest home of the Ansaris built on the outskirts of Ayodhya by his father, who too was originally known as a humble neighbourhood tailor. However, his death gave him a VIP status, with the who’s who of the local administration as well as some ministers joining his funeral.

Significantly, among the first few who turned up at this residence to pay their tributes to Ansari were the local Hindu priests, who had otherwise been at loggerheads with him on the issue.

In fact, no sooner than the news of his death broke out early in the morning, Ram Janmbhoomi priest Mahant Satyendra Das rushed to Ansari’s house. He showered praise on Ansari for expressing concern about the makeshift Ram temple being kept under a tarpaulin. “I cannot forget how Hashim Ansari sahib would always express his displeasure with the fact that Ram Lala’s idol was kept under a tarpaulin,” Satyendra Das said.

Mahant Gyan Das, the head priest of Hanuman Garhi, Ayodhya’s oldest temple, was next to arrive at Ansari’s residence. He also deeply mourned his demise. “Both Hashim sahib and I made some effort to thrash out an amicable final settlement on the issue, but what is God’s wish nobody knows. Ultimately whatever is destined, that will happen,” Gyan Das said.

A few years ago when Ansari first publicly expressed his inclination for an out-of-court settlement, several voices of dissent rose from different Muslim organisations. The All India Muslim Personal Law Board went to the extent of dismissing the suggestion as ‘meaningless’. Its spokespersons argued that the Babri Masjid was nobody’s private property and no individual could have the right to barter it away through any private settlement. Some Muslim leaders sought to run down Ansari as ‘old and senile’, but the man remained undaunted in his mission and did not dither from his stand till the end. 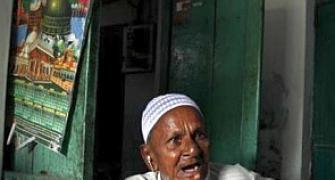